Jaki Jean on Today & the Shooting in Houston 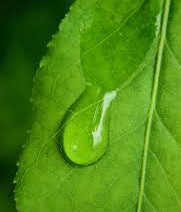 This morning, as Jean & I were watching the morning news with Charlie Rose on CBS, the local network affiliate broke in with “Breaking News.”

There had been a shooting in the West University / Houston area, beginning at not quite half past six o’clock AM.

It took place less than a mile from where I once lived on Milton Street with my eldest son Nick.

For the next five hours, all network broadcasts on five networks were suspended in favor of the local affiliate’s coverage of this event.

And for the most of those hours, no local reporters informed the public of facts verified by the officials handling the situation.  Instead, we were fed suppositions, theories, what ifs, musings, descriptions of what we could clearly see for ourselves on the screen & interviews of traumatized witnesses anxious for their less than 15 minutes of fame.

In any time, but especially in these times, this was an important story – but it was a story that needed to be reported responsibly & with verified information.

Not observations from a newscaster looking at the screen & explaining what the helicopter above was filming.

Nine people were wounded in this attack.  At first it was seven & then six & now the police have confirmed nine.  Three have been released from local hospitals.

The stories about the shooter, who was killed, vary from station to station.  I am still not sure what this man’s problem was.  He was a lawyer.  And clearly, at least temporarily, deranged.  With no ties to terrorist activities.  At least not today.

And he is dead.

He shot at random.  As people were leaving to go to the gym, to head in for work, on their way to take their kids to school.

There is a legitimate story in this tragedy.  Perhaps several – the stories of the nine victims.  The story of how this man decided to take guns to his car & shoot at random individuals.

I heard one local newscaster praise the police for exercising caution before going into the suspect’s apartment, “to make sure they knew what they were dealing with.”

If only newscasters & journalists would do the same.
Posted by Jaki Jean at 2:22 PM No comments:

Thoughts from the Aunt of the Bride on August 20th 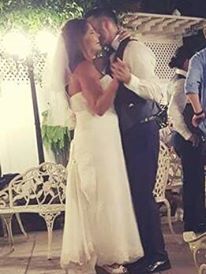 On the evening of August 20th, two days after a full moon, I had the joy of watching my late brother John’s beloved daughter Felicia Marie marry her son John’s father, Mat Adams.

My sister Janet & her husband David rented a handicapped van to transport our mother Jean to watch her eldest granddaughter get married.

We were one of the first guests to arrive – my sister took a route I did not expect.  I was accustomed during three years of my life, to hooking up with Beltway 8 to 45 to get to Galveston.  My sister chose to hook up with Highway 6 to 45 & even with the stop lights, assured that we arrived to secure a handicapped parking place & choose seats that would enable Jean to see the nuptials.

It was a bittersweet moment for me, for many of us remembering my brother John.  I kept fighting back tears as I wished he was present to give his precious daughter away, to enjoy his grandson, to celebrate the moment.

The very first family member to greet us was my nephew Clyde, Clyde is not his name.  His name is Johnny Alexander.  But his parents separated when he was very young.
And disagreed whether to call him Johnny or Alex.

Annoyed at the argument, at first I called him Scooby Doo.  Because he loved the cartoon series.  Over time, when the debate continued about Johnny or Alex, I began calling him Clyde.

To his credit, to this day, he still answers to Clyde when I speak to him.

Although he prefers John.

Others still call him Alex.  So I stick to Clyde.  It is less confusing for me.

Every time I see Clyde, I observe how he has grown into his Ettinger genes.  The older he gets, the more he looks like his father John, & the grandfather Jack he never knew.  He shares his father’s sweet & gentle nature.

As we waited for the ceremony to begin (the bride was late, having left her bridal bouquet, at home), I thought about Virginia, my niece & nephew’s maternal grandmother, & how she would have reveled in the day & the marriage.

But I think Virginia was watching with my brother & father & the groom’s mother from another view.

It was an evening of seeing my niece & nephew’s family, people we have known from before either of them were born, to speak with them & rejoice in the event.

On one level, it broke my heart.  On a more rational level, I realized that Tim earned that right a long day ago.

When my brother John died, Tim & his three sons accompanied my sister-in-law Sheila & her children to John’s funeral.  At the family gathering after the funeral, Tim told my mother Jean that he & Sheila would take care of her grandchildren.

When Tim gave the traditional father-of-the-bride speech, he closed by telling the bride & groom, each of whom lost a parent too soon, that Felicia’s father & Mat’s mother were watching & that they were proud of both of them & their love.

My sister-in-law Sheila was sitting with us during Tim’s speech, all of us deeply moved.  She said, through tears, “I am still mad at John for not being here.”

Because John lives on in all of us who knew & loved him.  Especially his daughter Felicia & son Clyde.  John’s son & grandson carry the same first name that he carried from his grandfather, John Alexander Simpson Ettinger.

It was a lovely night.  My niece was, as always, beautiful, wearing the same dress her mother wore when she married Tim.  Her groom Mat was dashing & handsome.  As was my nephew Clyde & my young grand-nephew John Timothy Ettinger-Adams.  (Although John Timothy kept stripping off his clothes because it was hot on that garden patio setting.)

A good day in the Ettinger – Castillo – Perry neighborhood.

One day, I am going to have to start calling Clyde an actual given name. 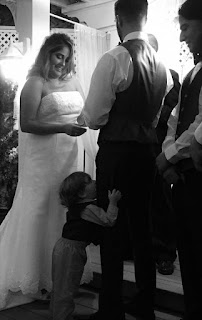 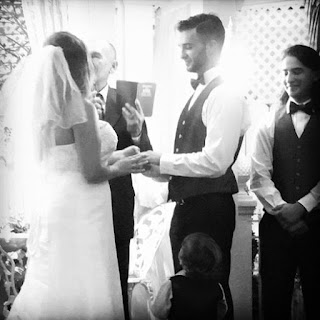