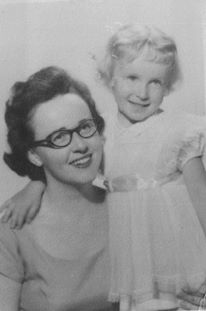 It began gradually.  It wasn’t an unfamiliar occurrence but I was still unprepared.  It had been many years & the episodes were always in a hospital setting.  I should have been prepared.  I should have Googled it.  I admit I did not want to face it.

Reassurances were readily accepted in the beginning.

I would get out of my futon bed, turn on the lights, search & announce there was no intruder, no extra person in the house.  No strangers.  No lost child.  No one next to her bed but me.

But Jean’s visits to alternative realities & dimensions have increased & intensified.

At times, I awaken to her screaming my name.

I tell her that I don’t see.  I ask her to please tell me what is going on.

They are trying to take away our phone.

I ask why anyone would want our phone.  It is a land line, I tell her.  No one wants a thirty-year-old land line phone.  No one calls us on it – we use it for your pacemaker monitor.

They don’t want us to have it.  They think we shouldn’t have it.  Call your sister.

The moment passes & I tell Jean again that the phone on the nightstand next to her bed is safe and sound.

Jean doesn’t believe me & she is angry and frustrated with my ignorance & lack of action.

But looking is not enough.  She wants me to see it, to validate what she sees.

I protest that I have not been sleeping all day.  That we watched “Murder She Wrote” & went to bed at 11 pm.  Look out the patio door – it is dark outside.

But one of our neighbors behind us, the one with the Women for Trump sign still displayed in an upstairs window, has turned on their floodlight & there is light out the patio window when I am claiming darkness.

My credibility that early morning took an enormous hit.

Sometimes there are nightmares.  Jean screaming, crying out things like Why are you doing that?  When I awaken her, telling her it was just a dream, she firmly tells me the same thing - that she was NOT dreaming.

There is also the matter of the dancing objects & objects Jean is sure are going to fall.  Doors dance, furniture dances. Sometimes walls dance.  The clock is going to fall – it is too close to the edge.   Books, DVDs, pictures are falling.

Two nights ago, it was the candy bowl in danger of falling. The inexpensive covered bowl, which Jean calls My Candy Bowl in spite of the fact that I bought the candy dish at Walgreen’s for my desk at work to hold Dove chocolates - is going to fall.

I showed Jean that the bowl was nowhere near the edge of the dresser & in no danger of falling.

I wanted her to believe me.

But the next day, she called for me with her whistle & said:

My candy bowl is in danger of falling.  You need to move it.

A kinder & gentler Jaki Jean would have just moved the bowl.

Instead, I removed the bowl entirely.

When I asked Jean why she does not believe me when I assure her that no one is there, that nothing is dancing, that there is no danger of falling, why she doesn't trust me, she replied:

Jaki, I don’t know.  But the candy bowl was dancing around everywhere.

And my heart broke a little more as I left the room.

The hallucinations are not going to go away & I cannot smash them. I cannot remove them from the room & make them stop falling or dancing.

Not that the journeys to other realities will cease.

I pray I will develop the wisdom & patience to handle them without seeing the look of disbelief & frustration on my mother’s face.

Last night, Jean woke me up at 2:00 am to ask for her book.  I pointed out the time, that it was time to sleep, not time to read.

Everyone else has a book.

Still believing in my powers of persuasion,  I assure her that no one else is reading their books.  Everyone else is sleeping.

Next time I will give her the book.