What interests you about this photo, Jaki Jean? 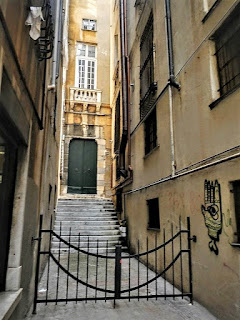 Most of Cate’s questions send me on a journey, reminding me of journeys I took across space & time in response to a question asked in a classroom.

Yesterday, Cate posted a series of what she described as random photos from a walk in Genoa, Italy.  But the one I am featuring is the one I told her was my favorite in a group she posted.

So this is my response.

When I came across this photo, I thought instantly – a gate, a path, steps leading to a door & a threshold.  Possibility for either transformation or transgression.

Windows, bars on windows, a single piece of cloth hanging, a statement on a wall resembling a hand.  A perspective always leading up & forward – to where?  To what? To whom?

My obsession with thresholds & windows & gates & spaces is a direct result of a course I took because I needed it for my major in English Lit – Renaissance Drama.  The concept of thresholds as a possibility for either transgression or transformation is not mine.

I read it in a book, exploring architectural space & its symbolism in literature & art in the Architectural Library on the University of Houston main campus.

The professor of that Renaissance Drama course, a Shakespeare scholar, was already a bit of a legend in the UH English department.  Not yet tenured, no one took her classes & left quite the same.

I convinced a group of slightly older than the average women at most colleges (who adopted me & allowed me into their worlds), all English majors, to take the class with me.

Of course, I would like to write that I convinced those talented women to take the course for noble reasons.

That would be more than disingenuous – it would be a lie.

I needed those talented, gifted women around me to take a course required for my major, for support & to deflect my fear of a not yet tenured but legendary professor.

When I think of who I was then, who we all were, who that amazing instructor was, I find it hard to fear a woman who inspired me to always keep a copy of Thomas Heywood’s A Woman Killed with Kindness on the bookshelves in my offices & now next to my bed.

Annie, as my friends & I called that legend when talking about her, was fierce.  My friends & I were equally fierce & Annie dubbed us the “Bombast Queens.”  A term from a Renaissance play.

We were a thorn in the side of our fellow classmates.  We read, we studied, we voiced our take on the texts.   We were older, we understood the importance of the moment.

Annie met the man she married while jogging in her inner-city neighborhood.  He was an architect.  When Annie spoke about a scene or a staging in a play, the space, the architecture, was essential to an interpretation of the narrative.

And I began to think, much in the same way.  My perception & focus changed when I see a space in a photo or a text & when Cate asks me a question.

I wondered.  Why do so many moments in Jane Eyre happen after or during Jane sitting at a window?  Why does it matter when a character in Faulkner, or any other novel by any other author, stands on a threshold? Why is Michal, King David’s first wife, seen in Biblical narrative looking outside an upper level window, her husband positioned & framed below her view?  David, in charge & chosen.  Michal, gazing from within a frame of the window.  Why?

What does architectural space have to do with literature or interpretation or imagination?

Everything.  Something I learned in a Renaissance Drama course by way of Dr. Anne Christensen.

Annie, & that trip to the Architectural Library (a really fine place for quiet studying) on the UH campus to secure a source, are responsible for my obsession with thresholds & other spaces of possibility for transgression or transformation.

I look at Cate’s photo, my mind soars. 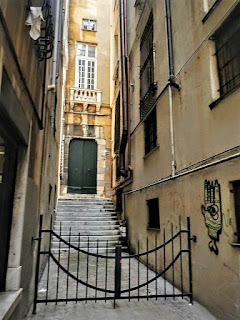 I see the gate & ask why it is there – to protect what is within or restrict access to those wanting to enter or to block a feared Other?  I wonder, what if I opened it, what if I walked that path, climbed those steps & knocked at the door?

What if I demanded someone answer my call at the door?

I wonder who is behind those windows?  If they watch my quest past the gate to get to the door, to be allowed access to what is within?

What about what I cannot see in the photo?  What is on either side of the doorway & its threshold?  How far does the building promising that threshold soar beyond the frame?

So, Cate, in answer to your question – that is what I find interesting about your photo.

And a text someone needs to write. 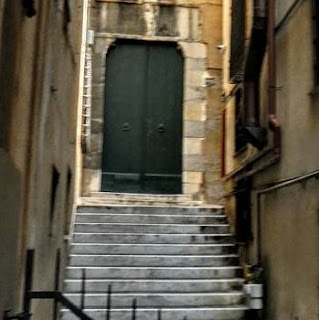 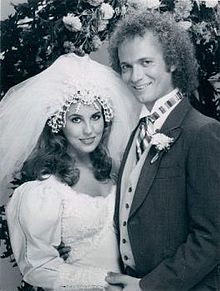 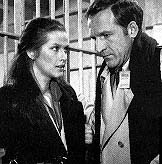 Search for Tomorrow, The Guiding Light, As the World Turns.

My favorite was As the World Turns.  It moved slowly, like a novel.  Perhaps in many ways those soap operas prepared me for reading Anna Karenina & East of Eden & To Kill a Mockingbird & Their Eyes Were Watching God & A Tale of Two Cities & One Hundred Years of Solitude.

And all those other novels.

I continued to watch soap operas as I grew up.  Eventually, I watched newer soaps that moved at a different kind of pace from those of my childhood.

Soap operas have all but disappeared from our lives, except in the case of the one playing out on our national stage.

I still watch The Young & the Restless & General Hospital.

I follow Y&R because I have watched since its first episode.  I follow General Hospital because of my father Jack.

During a hunting trip in Colorado in the early eighties, my father was pinned between a pickup truck & the wall of a building that housed a store catering to hunters.  It fractured the cartilage holding his pelvis.

My father’s recovery involved an extended hospital stay in Colorado & surgery & a lot of time away from work when he returned home with my mother.

Much of that recovery he eventually spent on a sheepskin in his recliner in the living room in the house that Jack & Jean built, watching television.

One afternoon, I visited my dad at home.  And found him in the recliner watching television.

I was stunned.  My father, the Phi Beta Kappa Aggie engineer, reader, ardent follower of politics, was watching a daytime soap opera.

And proceeded to explain the saga of Luke & Laura to me.  Jack also introduced me to Hill Street Blues, another soap opera that aired at night.

And explained in detail the history of the relationship between Frank Furillo & Joyce Davenport.

Jack especially liked the scenes on Hill Street when Davenport would put on Furillo's button down shirt after an intense intimate moment.

Because it was something I could share & talk about with my father.  By then, we had stopped discussing politics with one another – Jack’s reaction to my declaration to vote for George McGovern still rankles.

Throwing a plate of Jean’s spaghetti with meat sauce across the room still seems extreme to me.

Jack was an avid reader, as is my mother Jean.  I saw him with a book in his hands (but never during an Aggie football game) far more often than I saw him watching television (except during an election year.)

I read most of the books I found on bookshelves in the house (including racy ones in Jack & Jean’s closet on the top shelf - David Reuben’s Everything You Wanted to Know About Sex But Were Afraid to Ask is how I knew about birth control.  And probably why I drove more than one high school friend into Houston to visit Planned Parenthood.  I was adamant that the withdrawal method was not a reliable choice to prevent pregnancy.  Virgins are often informed about these things.)

One of the books I read was Advise & Consent by Alan Drury.  It was written in 1959 & won the Pulitzer Prize in 1960.  Centered around a sitting President’s controversial nomination for Secretary of State, it was the first of six Drury novels in the series.

It remains a rather amazing series – including a closet homosexual & a Senator  named Hatch.  Not Orrin & not from Utah.  The Senator from Utah was named Brigham Anderson.  The final two novels in the series are different versions of an assassination involving the President, the VP & their spouses.

The books were something my father Jack & I talked about.  Because I could not risk his reaction if we discussed something real happening in the political spectrum.

Flying plates of pasta are not amusing except in retrospection.

(And people wonder where I got my penchant for the dramatic . . .}

On the day he died, Jack & Jean drove into the inner city where I lived, to a Half-Price Books & Jack bought the last book in the Drury series.

I re-read the entire series, and then read that last volume, after Jack died.

The difference in the two scenarios of each alternative ending was stark & haunted me for years.

Given the soap opera circus that currently rules the fate of our country & the free world, I remember the final scenes of each of those last two novels.  Of each alternative ending.

I think it is time to put the ever-expanding titles on post-it notes above my work space on hold & read Alan Drury again.  All six novels.

Given that the current administration & Congressional leadership seems intent on taking the world back to a fictional time in the past.

Perhaps my sanity will be restored with a fictional version from the fifties & early sixties about events to come . . . it may or may not offer insight.

But the novels will bring back treasured memories of talking with my father. 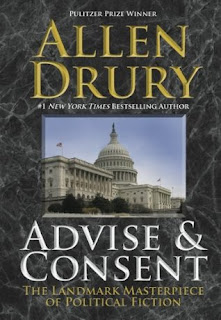