Jaki Jean on the Battle for the BIrd Feeder - J.J. vs. the Furry Tailed Invaders 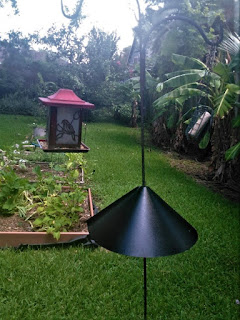 Sometime in the early 1970s, one of the builders in what is now Meadows Place grew irritated with the number of squirrels occupying the majestic trees in his upscale Memorial area home.  He had his crew set traps, capture as many squirrels as possible & transport the furry tailed rodents to the unincorporated area formerly known as The Meadows.

Or so the local legend goes.

As the trees Jack & Jean planted in the back yard grew, so did the yard’s squirrel population.

Growing up, I never thought about the squirrels much. Had I known then that Rocky the Flying Squirrel was a rodent, I might have paid more attention.

And stopped watching the cartoon.

For the past thirty odd years, I have waged open war on the squirrels in our backyard.

I understand that squirrels are part of our ecosystem.  I just want them to behave or be part of that system anywhere but my back yard.

Squirrels are not cute & fluffy.  Like all rodents, they possess continuously growing incisors on both their upper & lower jaws.

Continuously growing. Ever ready to chomp down, to destroy, to infect.  As fellow mammals, negotiation would appear to be advisable.

Over the years, I have tried to coexist peacefully – but squirrels do not play well with others.

I have fed them, filling a squirrel feeder with squirrel food.  I have given them gobs of yummy corn cobs to feast upon.  I have respected their presence in our shared space.

And still the squirrels constantly attempt a coup to conquer the bird feeder.

No amount of redirecting has resulted in a truce, in a lessening of attacks, in the establishment of a neutral zone. 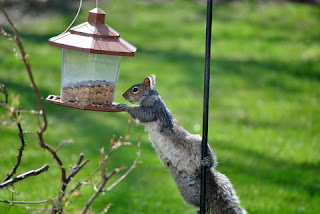 Recently, I tried oiling the feeder pole.  The squirrels laughed.

I tried placing a cactus with enormous prickly spine needles at the base of the feeder pole.  The squirrels laughed.

I read that while birds like red pepper flakes mixed in their food, squirrels hate it.

But because my squirrels have lived for generations in Texas, their taste buds are unfazed by hot & spicy.

In desperation, I went to where we all go for answers sooner or later – first, Google & then, Amazon.

There I discovered the Audubon Wrap Around Squirrel Baffle.  Available for next day delivery with Prime.

When the Baffle arrived, I was hesitant.  But it was a gamble I was willing to take.

If the squirrels were unable to penetrate the Baffle, there was hope for tolerable coexistence.

If the Baffle was unable to deter the squirrels, it could be returned, with disappointment.

Initial installation was a challenge, but after attempts, the Baffle remained in place.

And then the squirrels descended from their lairs in the trees.
I watched.

I watched as those furry tailed rodents tried to climb the feeder pole – only to crash into the Baffle’s barrier.

I watched as squirrels circled the area under the Baffle barrier, contemplating their ascent.  I watched as they attempted a flying leap, only to slide down its edge under their own weight.

I watched all of this devoid of sympathy or compassion.  Indeed, I watched with a sadistic satisfaction. 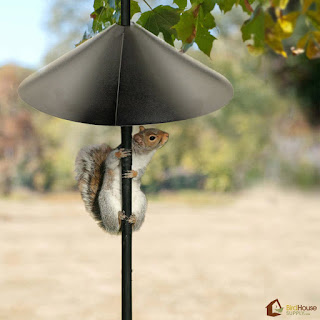 After several days devoid of avian feeding, I told my brother that I thought the birds were intimated by the Baffle.

He replied:  They will get over it.

One morning, after days of doubting the wisdom of my weapon of choice, the first birds reappeared.

A pair of cardinals.

After many weeks, the furry tailed rodents began to reappear.  Especially after the rain.

However, unknown to me, the furry tailed rodents had spent their time away plotting – devising a strategy to outwit the Baffle.

Although I have yet to discern the details of their strategy, I have witnessed them hanging from the tray of the bird feeder.  Baffle in place.

The furry tailed rodents have underestimated my commitment to protect the bird feeder from invasion.

Recently, I replaced Chris Stapleton in the CD of my car with Springsteen’s Born in the USA.  Springsteen has a way of renewing my resolve, my confidence.

So I wait & I watch, the same refrain playing in my soul:

No retreat, baby, no surrender.

This battle is not over. 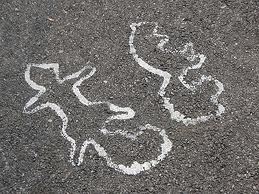