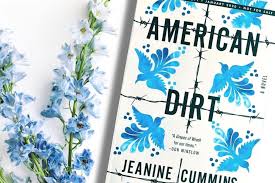 Before the reality of COVID-19’s threat to our lives, I told my friend Cate Poe that I would read & share my thoughts on Jeanine Cummins’ American Dirt once the library notified me that my hold was next in line.

COVID-19 closed libraries & when my local library “reopened,” it was only for drop up & curbside pick-up.

Initially, my choice of this novel was based on a review – before the controversy it inspired emerged full force.  It was depicted as the “definitive immigration tale.”

The reaction to this novel is multi-faceted.  It is a migrant story written in an American white woman’s voice (with an occasional gratuitous Spanish word in italics).  Every character’s thoughts & stories are written through that filter.

The controversy brings to light the reality that the publishing world is more likely to publish & promote a novel about the experiences of people of color – written by white authors than works by authors of color.  By those who have actually lived those experiences & narratives.

I approached this novel fully aware of the controversy & my reading was filtered by it.

Additionally, I approached it as someone who has, over the years, listened to first-hand accounts of crossing the southern border in desperation.

As I read American Dirt, it was those voices of those who had actually made the journey & survived in the background.

While I understand that reading any novel involves a willing suspension of disbelief, Cummins stretches that suspension until it breaks.

There is our heroine, Lydia.  An educated woman, a business owner, married to a journalist whose focus in on exposing the cartels & their leaders.  Taken in by Javier, a ruthless cartel leader over poetry & literature & chocolate.

Until he orders her entire family slaughtered at her niece’s Quinceanara  celebration.

The entire romanticizing of Javier is offensive.  His complexity – a loving father, a reader, a sensitive man on one side & a man of violence & unmitigated cruelty on the other.

I doubt that any victim of a cartel would find anything socially or culturally redeeming about a cartel monster.

There is Sebastian, Lydia’s journalist husband, who does not prepare a plan to protect his family as he writes article after article exposing the cartels & their leaders.

I won’t even go into Luca, Lydia’s extraordinarily gifted son or Lorenzo, a member of Javier’s cartel who follows Lydia on her journey to the border under orders from Javier.

Lydia’s journey is not particularly fraught with danger or threats.  Her crossing of the border did not ring true to me.  It was too clean, too neat, too conveniently enabled by random acts of kindness by strangers.

The novel ends after Lydia & Luca & their two young companions have settled into life in Maryland.  With no mention of the journey from the border to the east coast of the United States.

Outside of mentioning that Lydia works cleaning houses & Luca cannot compete in a geography contest because he is undocumented, there is nothing about what truly happens after Lydia crosses the border illegally.

The journey immigrants, migrants & refugees take does not end at crossing.  It is a grueling, challenging, frustrating experience to obtain papers & permits.  The path to citizenship is not easy or without cost.

Not to mention culture shock, the experience of displacement, & the mixed reception immigrants & migrants & refugees face.

Cummins chooses to end the novel in an Epilogue.  A rushed ending to a story that in many ways began again once the border was crossed.

What begins with an incredible act of violence ends with references to two texts.

In the Epilogue, Lydia buys a book of poetry from the local bookstore.  It contains Pablo Neruda’s “Song of Despair.”

The book is water in the desert. It costs
twelve dollars, but Lydia buys it anyway. She keeps it tucked into the waistband of her pants where she can feel it against her skin.

In their new home, Lydia rereads Amor en los
tiempos del cólera, first in Spanish, then again in English. No one can take this from her. This book is hers alone.

Why?  Why those texts?  Have I missed a brilliant self-reflective weaving of the nature of text itself?  Is it significant that Lydia stocks books she knows no one will ever buy until Javier comes along & buys them?  What do either of the texts by Neruda & Gabriel Garcia Marquez that the novel tell us about the narrative, about the plot, about Lydia’s journey?

Why American Dirt?  Dirt as in earth or soil?  Dirt as something to be tossed aside, thrown away – filth, excrement?  Dirt as in moral filth & corruption?  Or is it nothing more than an overwrought with meaning reference to American soil & what it represents?

If I were in a classroom, studying this novel, I would no doubt explore these questions in preparation to write a paper.

But I am not in a classroom.

Now, I can let go of American Dirt, & await notification from the library that I can pick up Allende's A Long Petal by the Sea . . .