Over the past few years. I have struggled to compose my thoughts on the endemic racism, resentment & ignorance that continues to haunt & threaten our nation, our world & our souls.

In the aftermath of the October 2018 assault on the Jews attending Shabbat services at the Tree of Life synagogue in Pittsburgh, my childhood friend, Betsy Davis posted the following:

Growing up in El Paso and living a half a short block from Temple Mount Sinai, I always felt blessed to have the diversity of friends. Going to temple on Friday night, being in a home honoring the sabbath, and learning and understanding the Jewish traditions broadened my understanding of religion. I always admired the close bonds and shared customs of the Jewish people. I do have to admit I was even a little jealous that Rosh Hashana and Yom Kippur allowed my friends time away from school to watch the World Series.   I cannot imagine not having these friendships because of a religious difference. My heart and love is with you all.

A discussion enued among El Paso peeps & I thought, not for the first time, but with a different perspective, about the trajectory of my life.  A life that lead me from Dallas to El Paso & from El Paso to Houston to Washington DC & back to Houston.

As I thought about how my life has moved, I recalled something from Ta-Nehisi Coates’ We Were Eight Years in Power.  It is a book I keep reading – composed of eight essays published in The Atlantic, one for each year of Obama’s presidency, preceded by the author’s notes looking back at each essay, each year & at himself.

In a world with little or no interaction with whites.  Where everyone was the same & skin did not define you.

Coates’ narrative & my friend’s post merged together in my thoughts.

For the first twelve years of my life, I grew up in segregated world.  In segregated white neighborhoods.  Where everyone was the same & color did not define you.

Because we did not experience difference.

What we did not know, because we were too young, was that color did define us.  We were all born with a skin that placed us in a position of privilege.

The only black person in the first twelve years of my life was the woman who cared for me while my father Jack attended Texas A&M & my mother Jean worked for the telephone company.  She once brought her granddaughters with her.  Both of whom joined me on my swing set & explained that green flies would one day engulf me.  Or, at least bite me.

I never heard anyone speak any language but English.

Moving from Dallas to El Paso expanded & enriched my life.  My entire world was rewritten & rearranged in that landscape of desert & mountains & sunsets.

The landscape was so very different from Dallas & east Texas.  At first the desert felt empty the mountains made me nervous.  I felt barren & closed in.

Because our house was under construction, we rented a house on Palo Alto, a walkable distance from our final destination on De Leon.

On Palo Alto, I met people with exotic last names like Paredes.  I met the Catholic family at the end of the block, living with half a dozen children in a house not much larger than our three-bedroom rental.   Across the street was a family whose first born was a little person.

I got shot in the leg with a BB gun on Palo Alto.  I heard Spanish for the first time in my life on Palo Alto.

That summer, between church & the eclectic residents of Palo Alto, the move to our house on De Leon & endless hours at the neighborhood pool, I met & made friends who young people who just happened to be Jewish.

It was the late sixties & early seventies.  So much of what happened during those times eventually formed the person I was destined to be – the Cold War, the Civil Rights Movement, the Vietnam war, the Women’s Movement, the fight for the right of eighteen- year-olds to vote.

All while living in El Paso.

What once felt empty & barren & confining evolved – I discovered the beauty of the desert & felt the comfort, the protection, of the mountains.

Our move to Houston, a city my father Jack once announced he would never move to because of the heat & humidity, opened another world, another reality.

Houston was flat, so wet I felt that I was drowning with every breath, so open that I felt exposed & vulnerable.

There were no sunrises or sunsets serving as gifts of wonder & calm.

We moved into a rural county bordering Houston in what is now one of the most diverse counties in the country.  It was not so diverse when we moved.

But it was the county that first inaugurated my awareness of having lived in a segregated society.

In El Paso, I believed that every person defined as black was a potential Martin Luther King, that my Jewish & Mexican friends were not Other. I did not recognize the kind of Difference I came to experience at my new high school.

It was a difficult & life altering experience.  And I was totally ignorant of the hierarchy & division along racial lines within John Foster Dulles High School.

The house that Jack & Jean built was not quite done when we arrived, so we lived, along with two other neighbors, at a motel in Houston, just outside Fort Bend county.

Every morning Jean dropped us off in front of the school.  And every day I faced minions of black students who cut me no slack.

Eventually, the crowd crowned Weinie Legs.  And every time I walked past, trying to find a space safe from that coronation, I wondered why they did not like me.

In truth, I was very thin – perhaps I really did have weinie legs.  But the reaction to my presence confused me.

After a few days of taunts, I wandered into a patio.  Where all the Mexican students gathered before school.

I thought, these kids are familiar.  But no one was particularly interested in hanging out with me.  And I was too wrapped up in feeling alone, taunted as Weinie Legs to walk up & bravely introduce myself.

Eventually, I gave up.  On everyone, including myself.  I found a bench in a breezeway & spent the time before the opening bell reading.

Then a week or so later, in Charlotte Moore’s English class, my classmate who sat in front of me, who checked every day to make sure I had both a pen & pencil, paper & the required texts turned around & said:

Jaki, you need to leave the bench & come inside the cafeteria with us.

Us.  Inside with Us.

Us included a very pale majority, interspersed with Mexicans & blacks who had successfully integrated into the majority.  Athletes, band members, Honors class students.

Navigating my new reality was not without challenges.

In May of my senior year, dismayed, discouraged & defiant, I wrote an op-ed for the Viking Shield.

Recently, in the process of preparing for foundation work, my sister Janet found a black case fraught with treasures from the past.

Including a faded, yellowed copy of the May 9, 1972 Viking Shield.

While I remember the day it was published, I no longer remember exactly how it came to be  published.  I was not on the Shield staff.  I think I submitted it as a letter to the editor.

It was titled My Thoughts About Necks Turned Scarlet, with an accompanying cartoon & took up half of page 3.

Jaki Jean was verbose even then. 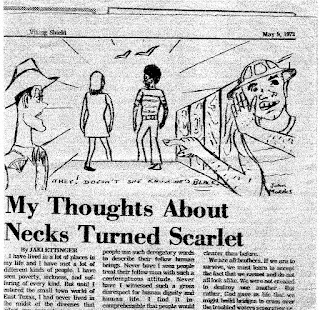 Reading that 18-year-old Jaki Jean was both difficult & enlightening.  But in her text, I recognized the beginnings of my personal mantra:

Union without loss of Self, Integration without Assimilation, Difference without Dominance.  Inclusion.

I remember that May 9th, after the paper was distributed.  I was genuinely trepidatious about its reception.  I was an idealist living in a reality I believed unnecessary.  I wanted a world where Us was inclusive, not exclusive.  Where Us was diverse.

That May 9th, as I stood at my locker to retrieve books for the next class, a young woman of color approached me & asked if I was Jaki Ettinger.

When I told her I was, she hugged me & said Thank you.  I never knew that white people felt or thought like me.

She was not the only black classmate to reach out to me.  A dozen classmates gathered behind her, waiting to talk to me.  There were tears & smiles, hugs & handshakes, introductions.

In that moment, I realized I was not alone.  And I knew that the hope I felt crossed racial barriers.  Even in a reality defined by skin tone & difference.

I also realized that sometimes it only takes starting a conversation to find common ground.

Moving from El Paso to that not quite yet diverse county outside Houston changed my life, widened my world & enriched my experience.

Just as El Paso changed me.

Anyone who was born in or called El Paso home understands its unique & welcoming community.  It was true when I lived there, forging out my belief system, & it is true now.

It never occurred to me when I lived in El Paso that a white supremacist, anti-Mexican,  would travel across the state to retaliate for an imagined invasion & infestation from Mexico & slaughter 23 people, wounding almost two dozen others.

We do have an infestation in this country.  But not one brought here by immigrants from across our southern border or our northern, eastern & west borders.

It comes from within.  It is who we are as a people.  And as human beings.

It is endemic, deeply drilled into our collective cultural conscious & memory.  From our very beginnings.  It is immoral, divisive, & destructive.

The true infestation is comprised of racism, xenophobia, misogyny, ignorance, prejudice, fear of & the need to dominate the Other.  All fueled & legitimized by the rhetoric of the current leader of the free world.

I never envisioned that I would lose that moment of hope from 1972.

In these perilous times, I am not sure I can hold onto my youthful hope for change.  But I refuse to abandon my belief that difference is something to be embraced, not a call for exclusion.  It is our strength.

We will need all of that strength to ignite hope & work for a world that embraces diversity & difference. 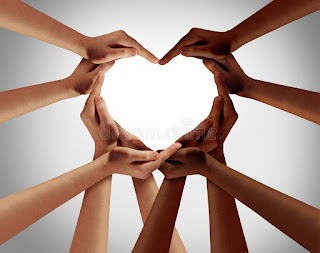