Jaki Jean on Reintroducing Jean to the Stephanie Plum Series. 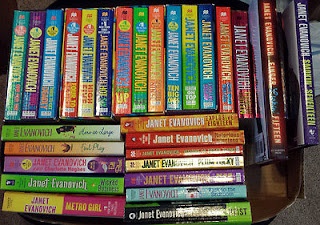 Providing my mother Jean with a steady supply of reading material proves challenging at times.

Jean enjoys the writings of Max Lucado & opens each morning with a reading of his series on meditations.

On Sundays, she reads the Bible – last Sunday she read Joshua, Judges & Ruth.

She has read all of my favorite authors – every piece of fiction I studied & continue to read.  She has read works aimed at a middle school audience – works I find fascinating because they did not exist in my middle school life.

Recently, she read Willa Cather’s “Song of the Lark.”

I tried to entice her into an early P.D. James novel – pre Adam Dalgliesh.  When that failed, I pulled a hardback off the shelves, a book I bought, inexplicably, at a dollar store.

It was Janet Evanovich’s “Fearless at Fourteen.

Fifteen years ago, I worked for a division of Sprint.  It remains one of my favorite experiences.  Hired by a woman with whom I had worked at two other companies, it was almost stress free.

My position offered me a generous salary, with an allotted  budget to choose a benefit package.  A nice office, a lovely view, a short commute & an array of lovely & interesting co-workers.

One morning each month was stressful.  Preparing a report for the field, dependent on the field’s accurate & timely reporting to our office.  Even the journal entries to be uploaded to the corporate office under strict timelines designed for SEC reporting were less stressful.

But it was one day.

Every other day was a delight.

Within a few months after 911 & the fall of Enron, Sprint closed our division.  We were all given severance packages in accordance with our tenure, packets instructing us on how to file unemployment, apply for Cobra & links to employment websites & resume services.

I was one of three team members who remained to the absolute end.  During the transition, when we trained teams from other towns & divisions to do our jobs, we were given an amazing amount of paid down time, encouraged to find a job, use the company’s resources.

Eventually, Sprint moved us from our lovely window view offices in Houston’s Galleria area to share space with our division’s IT department – most of whom preferred to work in the dark.

Accounting is difficult to approach in the dark.

Our cubicles were amazing – giant, with storage & lighting we each could control.  Ergonomically designed chairs.  Counter space galore.

As more & more of the team left by choice for another position or were laid off, something unusual happened.

I began to hear laughter, single bursts of laughter, from different cubicles.  Curious, I started investigating (believe me, there was not a lot to do in those last days – mostly we exchanged job leads & planned lunch).

Co-workers were in their cubicles alone, not on the phone.

And laughing out loud.

That is how I discovered the Stephanie Plum novels by Janet Evanovich.

I read my way through them during those last months at Sprint & for years after, mostly in paperbacks.

Paperbacks, unless they are of fine quality & larger than one associates with a paperback, are now problematic for Jean with her Parkinson’s.  Books in general can be difficult – she can only turn pages & control the turn with her right hand.  She can no longer control movement in the fingers of her left hand.

Since I reintroduced her to Stephanie Plum, she has not put the book down except to eat, sleep or watch the Texans  & Wheel of Fortune.

This weekend, I will be making a trek to Half-Price books for Stephanie Plum novels.


And probably re-read each again myself & laugh out loud.  So will Jean.
Posted by Jaki Jean at 12:48 PM