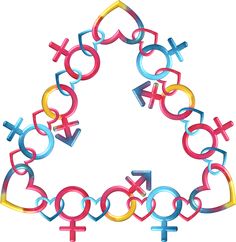 After a bit of delay, I again revisited the link you shared with me.

After viewing it several times & jotting down notes & thinking, I visited http://womensliberationfront.org/.  Kara Dansky, interviewed in the link above, is on the Board of Directors.

The site intrigued me for a lot of reasons – impressive goals on the part of females - & gave me pause to rethink some things.  More on that later.

First, in response to your request to share my reaction & feedback, & in the interests of transparency, I need to disclose that the issue of biological sex & gender identity was & remains a major part of how I read, how I approach political issues, & how I interpret & navigate with Others in this ever evolving world.

In 1996, I requested to attend a graduate seminar in Modern Literary Theory as an undergraduate.  And was allowed to do it as a Special Project class for my major.  My paper in that seminar was entitled, “Feminism and Foucault:  Pinning & Unpinning Women to Their Sex.

And to find a way how I, who believe gender is a combination of both biology & culture & time & self-realization & more, fit into the debate.

Dansky, as a representative of WoLF (Womens Liberation Front), argued in the Tucker Carlson interview on Fox News that the group’s objection to using Title IX as justification for a federal decision to allow biologically determined boys & girls & men & women to defy the culturally constructed ideas of male & female & identify with a gender not in sync with their genetic makeup, demeaned women & girls.

Or so it seems to me.  Dansky spoke articulately about several concerns she shares with WoLF members.  For her, including transgenders in the choice to define oneself & write the text of one’s own life, somehow is a threat to biological girls & women.

Not once did she mention a similar threat to biological boys & men.

As the mother of two sons, that omission bothered me.

That bothered me.  Again.

Over the past decades, when the term “transgender” was first used, women & girls were not the only ones, as Dansky suggested in the Fox News interview, asking What is gender identity?

Her discussion of that question was, once again, limited to females.  This is simply untrue.  Especially now, when both young people & adults born both female & male struggle to find an answer to what defines their gender identification.

As do philosophers, theorists, writers, artists, musicians, doctors & lawyers -  males & females in all walks of life & in all positions.

On WoLF’s website, it defines its “Task  Forces.”  One of the four is:
GENDER ABOLITION
·         Seeks to abolish the gender-caste system.
·         Educates about the harms of gender and its centrality to male domination.
·         Vigorously defends women-only spaces.
·         Defends sex-segregation of domestic violence shelters, bathrooms, locker rooms, and sports teams.
·         Supports detransitioners in their struggle to be healed and heard.

If, by “Gender Abolition,” WoLF means abolishing artificial roles assigned to both males & females, I am on board.

While I understand the theory & reality of a “gender-caste system,” I would argue that “gender” itself is not central to male domination.  Rather, it is the interpretation of gender, the language & images used to describe & impose attributes to males & females that contributes & helps fuel patriarchy.

And while I understand the Task Force initiative’s to “vigorously defend women-only spaces,” I think it is a justification for the organization’s exclusion of anything Other than biologically female.

About the final Task Force initiative – to support “detransitioners” in their struggle – because I understand the complexities of the issue of gender, I understand that there are those who struggle & experiment & decided that they are not, after all, transgender.

However, the wording suggests that transitioning is like a condition or a disease & must be healed.  That wording & suggestion is the fault of the writers of the initiative & perhaps, of my reading of the words & my interpretation.

Dansky spoke about how women can no longer talk of body parts or pregnant women (citing “pregnant people” as the preferred term -  a term I have never encountered).  About the refusal to ignore biological reality.

I would,  not so humbly,  suggest that Dansky revisit her position. To revisit her refusal to acknowledge how the expectations of what defines male or female are determined by more than anatomical equipment or even DNA.

How would Dansky & WoLF deal with a young teenage girl whose birth certificate defines her as a female, who possesses all the necessary female equipment, but whose DNA does not have the second X chromosome that genetically defines her sex as female?  She is one out of every 2,500 live births of female babies who have Turner’s Syndrome.

My young friend, now 14, chose not to allow Turner’s to define or limit her.  She has lived her entire life as a fierce, loving, funny, talented & kind young woman.  She has never doubted that she is a female.

Now that she is in high school & studying DNA, & because she has educated herself about Turner’s Syndrome, she recently asked questions about the implications of missing that X chromosome in defining her sex & gender.

And has been reassured that she is, indeed, a girl.  She chose & claimed that identification as she has done & lived long before her diagnosis.
What would Dansky & WoLF do with other genetic inconsistencies?  With children born with complicated, conflicting body parts?  With children & adults whose original birth certificates defined them as male or female, and undergo sex reassignment surgery?  As both infants & children & adults.

I would also encourage Dansky to open her thought process to the impact of culturally specific expectations & the traits & limits those expectations assign to both males & females, the influence of environment, diverse family history & traditions affect the way we perceive gender identity in ourselves & Others.

Neither Woman nor Man can define identity & claim self-identification based totally on genetics or anatomy.  Humans are more than the sum of our body parts & genetics.  What is written on the text of our bodies & our lives is influenced by so much more – culture, tradition, education, experience, choice & time.

Unfortunately, my visit to the Women’s Liberation Front did nothing to endear me to Dansky’s position or WoLF’s mission.  The page states:

What Kara Dansky & WoLF need to come terms with is the reality that females are not alone on the planet.  We are surrounded, thwarted & supported by both females & males.  And all the different & evolving definitions of gender.  We cannot exist or fight against discrimination, or promote inclusion & understanding or continue as a species without one another.

In my own mantra & thought process, I believe in the power of inclusion & its ability to change the world for the better.

Integration without assimilation, union without loss of self, difference without dominance.

No positive change in the human experience ever emerged from fear of the Other.  Nothing fine or worthy ever came from exclusion & marginalization.  Or from claiming the right to define one’s identity while rejecting the rights of Others to do & make the same claim.

Progress comes only with inclusion – when those who aim toward the same goal look past differences between one another & focus on the common ground needed to achieve the goal.

Women can only change thousands of years of patriarchy & its linear discourse by inclusion of the Other.  Those who do not look like us.  Or always think like us.  Or do not possess a clitoris, vulva or vagina.  Others who are often the perceived enemy of Self.

I have no problem with women only or women centered groups & organizations.  But I do have a problem with limiting the definition of who is or what constitutes “woman.”  It far more complex than biology.

As a self-proclaimed Feminist & as a Christian, I maintain that this implication is fundamentally untrue.  And, in the end, divisive & destructive.

Pitting Feminists against Women who are Christians.

My conclusion is this:  I cannot get excited about a self-proclaimed radical Feminist who defines Women as the sum of their body parts & excludes Others.
Posted by Jaki Jean at 11:29 AM