Finding the NSI Barbie at Aldi's in Meadows Place 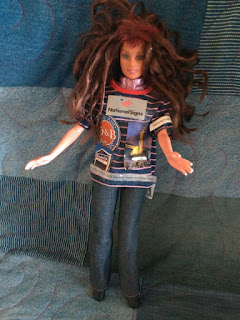 Several days after it opened, I explored the much anticipated new Aldi’s in my little city of Meadows Place, Texas.  I thought by avoiding the opening the previous Thursday, the crowds might decrease.

I am an optimist & a dreamer.

The parking lot, which used to look generous while under construction, was almost full.  I found a space & walked to put my quarter into a slot to get my cart.  I helped a man figure out how to facilitate the return of his quarter & set out on my quest for kiwi at an affordable price.

The Meadows Place Aldi’s did not disappoint.  The aisles are wider than the Aldi’s at the previous location I patronized.  Laid out in a similar pattern, with a few differences.  I did not spot the bread aisle, although I have since learned I walked past it in the quest for kiwi. I did not find a large container of unflavored Greek yogurt with 24 grams of protein.

But I am an optimist & a dreamer.  Although I subsequently found the bread, I still awaiting the large container of plain Greek yogurt.

The kiwi & blueberries were there – at less than half the price of the grocery store a few blocks away.  As was the trio of red, yellow & orange bell peppers & the organic chicken broth.  I had to search for the section containing the canned goods I needed.

But the checkout lines were all manned & in spite of the crowd, moved quickly.

It was while examining the fruit juices, reading the label of a pomegranate flavored 100% juice that I imagined someone saying my name.  It was there that I found the National Signs Barbie.

Or, her inspiration, found me.  She said:

Debbie, who was working full time & going to TSU to become a social worker.

When I arrived at National Signs, my own direct reports did not mingle with me at first.  I spent most lunches alone, or at my desk, or driving my VW Beetle around the NRG Stadium area, wondering why I had taken the job.

After learning that all office supplies had to be approved by a person who frequently went through desks & pulled out what he felt was a surplus of hoarded supplies to justify not approving requests, I brought my office supplies from the desks at my previous jobs.

And my own pens & pencils & markers.  I made sure to inform the Office Supply Police that these were my personal possessions & were not subject to raids on hoarded supplies.

I also brought the Barbies.

When both my brothers & my sister produced daughters, I developed a love / hate relationship with Barbies.  I hate the ridiculous body image Barbie established for little girls.  But I also remembered playing with them as a little girl.  They were not as interesting to me as baby dolls that felt like real babies when I held them.

But I bought Barbies for my nieces.  It was often a struggle to find a Barbie that resembled their diverse coloring.  I spent a lot of time in Barbie aisles in Toys-R-Us & Wal-Mart.

At some point, I wanted a red haired Barbie.  So I bought a blonde Barbie (no chance of finding one with one eye darker than the other or one whose eyes changed color with its surroundings) & my youngest niece & I dyed her hair with Rit dye.

Subsequent attempts proved more successful than the first & the red headed Barbies ended up on a bookshelf above my desk at work, along with a copy of the complete works of Emily Dickinson (one never knows when one might need to read Dickinson), Virginia Woolf’s To the Lighthouse, Thomas Heywood’s A Woman Killed with Kindness, Luce Irigaray’s This Sex Which is Not One, & a feminist guide to mythology.

One never knows what one might need to read during lunch at one’s desk.  Or a random moment seeking sanity.

In my next job, the red headed Barbies followed.  And in the interests of team building, I posted a Bowling Barbie with an old trophy from my parents’ bowling days to promote participation in the company’s bowling day.

There was discord between departments, but Bowling Barbie attracted attention & discourse replaced discord.  At least for the company bowling party.

The Barbies & books & diversions followed me to my first job in corporate America – a division of Sprint.  One of the first questions asked the CPA with whom I had worked at two previous jobs was:

Are the Barbies Welcome?

She assured me that yes, they were welcome.  As were chocolates.  And the feather boa I kept because a girl never knows when she might need a feather boa.

When I took the Barbies to National Signs, I displayed them on a ledge above my office window overlooking the production shop.  On my bookshelves, I added my books & a radio / CD player & CDs designed to calm or inspire me & a small black & white TV.

To attract conversation & as an act of team building, I created a National Signs Barbie.  And kept chocolates on my desk.

Debbie was my inspiration for the NSI Barbie.  She was not one of my direct reports, but her job was important for me to understand in order how to produce the job cost reports I submitted each month.

We attended the same weekly meetings, including production meetings in the offices downstairs.

She was peers with & respected by my direct reports & eventually, I was invited to lunch & never again had lunch alone except by choice or necessity.

Over time, I asked the ladies who lunched together why they did not ask me to join them for lunch break at first.

We had to check you out, make sure you were here to stay.

Apparently, my most recent predecessor lasted one day.

I cannot recall when Debbie first felt comfortable enough with me to talk about the woman who was her partner or about her return to school & her pursuit of a degree in social work.

As I have expressed earlier, Debbie is one of those rare, truly genuine human beings.

When I created the NSI Barbie, I spent many visits to Barbie aisles to find the right clothes.  I spent hours with a curling iron & gel arranging her hair to reflect Debbie’s natural curls.

I aimed to make the NSI Barbie not only represent the company, but its inspiration.

When Debbie found me at Aldi’s I remembered how many times I have thought of & wondered about her since our time together, how much I enjoyed talking with her, how her warmth & empathy made difficult times bearable.  Whether personal or professional.

Her smile still lights up a room & one’s soul.

She asked about my family, remembered my two sons, remembered that my now daughter-in-law, the Lady Jane, had worked in a pet store during high school.
It was not a long conversation, but it brought back memories of people who sought to create & maintain a positive, supportive working environment in the face of toxicity.

That Sunday, I went in search of the Barbies – I had forgotten how many were natural redheads, how the face & look of Barbie had changed.  I found Rosie O’Donnell, Zena (but not Gabriel, Irish Barbie, Valentine Barbie, Mardis Gras Barbie, Rodeo Barbie, Halloween Barbie, Easter Barbie, Gardener Barbie, Overalls Barbie, Patriotic Barbie - Barbies I no longer remember choosing or dressing.

And I found Prince Charming in the box of Barbies & others.

Slightly smaller than his female companions. 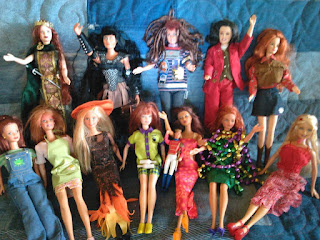 NSI Barbie, inspired by Debbie, brought back something I never want to forget.

The encounters we experience, not just the prolonged or limited relationships,  but the random sound of a voice in an Aldi’s aisle, matter.

Somehow that random moment at Aldi’s reminded me of who I have been, who I am, & who I strive to be.

Someone remembered as lighting up a moment in time.