Hawks in the Trees Near the House that Jack & Jean Built 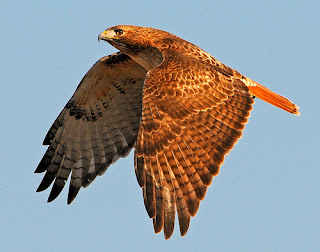 In the midst of everything that is going on in our world today, I am intrigued by hawks.

Specifically, the red-tailed hawks that are dwelling nearby & hovering around my house.

At first, I was aware of their presence by what sounded like a raptor from “Jurassic Park.”

Then, one early morning, I heard a fierce swishing sound, the wisp of wings, as I was unlocking my car.

I looked up & saw a magnificent bird land high in one of my next door neighbor Mr. Israel’s tree.  I stood there, watching him.  He spotted me & moved higher.  Then he hit the air & flew to the branches of one of Miss Juta’s pine trees on the other side of our house.

He was glorious to watch.

I told my brother about the hawk & wondered aloud if I should refill the bird feeder & buy some more suet.

He smiled & said I think it is more likely that the hawk would prefer a mouse or small animal.

After all, a hawk is a bird of prey, not a vegetarian.

The next day, when my brother left to go to work, he came back in & told me – there are two hawks in Juta’s pine tree. One was carrying a mouse or baby squirrel & dropped it when he saw me.  They must have a nest nearby.

I went out & saw the pair move from branch to branch, as high as the branches went.

They were talking to one another, no doubt discussing which one was going to retrieve the dropped mouse or squirrel.

I wondered if their nest had eggs in it or little hawks.

During the next days, I saw the hawks in various trees & heard their calls even when I could not find them.

Today I went out for the mail & my neighbor Mr. Israel called me over his yard.

Have you seen the hawks?  Their nest is in one of my oak trees.

Mr. Israel showed me where to look – at the top of the tree I could see the bottom of the nest.  It appears to be a little over three feet wide.

In the mornings, around seven o’clock, Mr. Israel hears the female calling for the male.  The other morning,  he heard a tiny tweet.  There is a baby hawk !

Concerned what to do if the baby fell out of the nest, Mr. Israel called the game warden.  The game warden told him to call immediately if that happened & they would come out to rescue the infant.

Through the game warden, & a little Google searching, we learned that hawks mate for life.  Ordinarily they take a new partner only when one dies.  Females lay one to three eggs at a time, depending on the available food supply.  Usually in March or April.  We should be seeing the baby hawk, called an eyeas, take small flights in a few weeks.

Mr. Israel has been observing the hawk family with his binoculars.  He told me that the male often lands on our roof & the old basketball hoop.

I look forward to seeing the eyeas fly.  Maybe we should name the hawks, like the most famous & photographed urban red-tailed hawk, Pale Male in New York City. 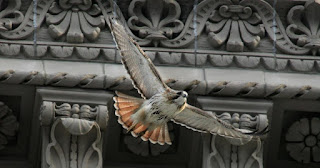