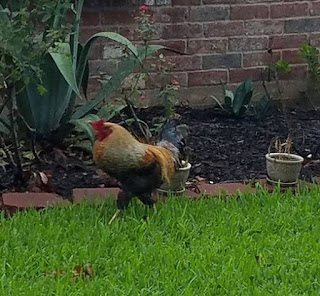 Fred, the most famous resident of Meadows Place, is alive & well during Harvey.  Photo by MP resident Lee Rex.

To paraphrase my friend Betsy Davis:  Harvey is like a bad boyfriend, the bastard just won't go away,

(Bastard is me talking, not Betsy.  Please don’t tell Jean.)

We woke up to rain & flooded streets here in Meadows Place.  But relatively unscathed, with power.  The AT&T DirectTV cable goes out intermittently (I am convinced the satellite houses a poltergeist with multiple personalities), but I held on to our beleaguered rabbit ears so that we can keep abreast of current conditions.

The city of Meadows Place recommended taking shelter in place (as if we had a choice – the entrances & exits to our fair haven are impassable).  Many city streets are flooded, some homes without power.  The city will answer only life-threatening emergency calls.

After a bit, the rain stopped & the water stopped rising in the street.  All part of Harvey’s deceptive strategy – seducing us into a false sense of relief & security.

Only to begin a few hours later, to replenish the now slowly receding water levels.

Most of our afternoon has been rainless.  The water in front of our house flowed down into the storm sewers.

And now, fifteen minutes after three, it has begun again.  The satellite has, of course, lost its signal.  It is not a drizzle, but a firm I’m back & I am not done with you yet from our unwelcome visitor, the reappearing bastard boyfriend.

As I watch the news, I am humbled by how incredibly lucky we are here in the house that Jack & Jean built.  People are still hunkered down across Houston & its surrounding areas.  Families are waiting in their attics & on their roofs to be rescued.  Families frantically trying to save a lifetime of possessions, families walking away from it all through the rising waters.

As the day comes to a close, the rain & the threat of flooding continues.  As do the rescue efforts.

I went out earlier to see if the accumulated street water was draining & watched as a neighbor across the street went to check on our 83-year old neighbor Mr. Bob, who lives alone & is in frail health.  Mr. Bob has family nearby, but it may be impossible for them to get into our little hamlet or out of their own hood to check on him.

Across the area, neighbors are checking on neighbors, sharing resources, driving from unaffected small towns into flooded areas with their boats to help people out of flooded homes.  Offering a place to stay, paying for a desperate stranger’s gas, finding formula for a mother who miscalculated what she would need for her infant.  Taking food & supplies to shelters.  Comforting someone else’s children in a shelter while your own sleep a few feet away.

The headline in the New York Times online this evening reads:

With all due respect to & for the NYT, I don’t think the city, its environs or its residents have been plunged into utter chaos.

I see that sense of togetherness & generosity in the local coverage.  I see it in our Meadows Place Facebook group.

I see it gazing across the street from the house that Jack & Jean built. 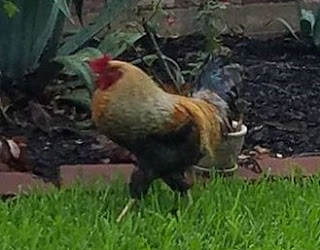