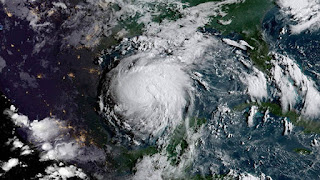 This morning my phone woke me up to inform me that there were tornado warnings for our area until 1:30 am.

Not a calming or reassuring way for Jaki Jean to start Day 1 of Harvey’s visit to the Lone Star State.

While I have survived hurricanes, tropical storms, flooding & hiking the Grand Canyon, I have never experienced a tornado.

Inexplicably, my lack of experience does not matter.  It does not dampen my fear & anxiety.

I blame my childhood in Dallas & the memory of multiple funnel clouds on the horizon.  And the indoctrination we received on what to do while walking home from elementary school during a tornado.

When we weren’t kneeling against inside walls, covering our heads with our arms in case of an attack by the bomb carrying enemy without a name.

That, & my sister Janet's dream.

It is a story my mother loved to recall over the years.

The morning Janet announced that the night before, she dreamed she blew out a tornado.

NOTHING that powerful or self-affirming ever happened in my technicolor, vivid, well-scripted dream narratives.  EVER.

What the hell would I do if confronted with a tornado – in my dreams, in my mind, in reality?

I gave up trying to write a plan for such a confrontation years ago – I would simple hunker down in a bathroom & pray.  In any venue envisioned.

My first response early this morning, after realizing that the tornado watch was almost over was that I should have bought a bag of onions & more canned tomatoes.

To make a pot of beans.

Somewhere in my memory is written that with the makings for a pot of beans, one is prepared.  For anything.

All the water in the street in front of the house that Jack & Jean built had drained before the sun arrived today.  Not that we ever actually saw the sun itself – just its beams of light defiantly piercing the layer of dark clouds hovering over us
.
In the early hours of this morning, I knew that my corner of the world that is Texas was not in peril.  None of the local affiliates had interrupted scheduled programming were covering the horrors of Harvey.

So I turned to MSNBC.

I learned some fascinating geographical facts from MSNBC.  First, the tornado that wrecked destruction over 50 homes in a community near Missouri City, located 30 miles from Houston.

Because this geographical fact was in direct conflict with personal experience & existing facts, I was puzzled.

For most of my forty six years in the area, I have traveled through neighboring Stafford & Missouri City to Houston.   It did not feel like a 30 mile trek.

So I did what any puzzled researcher would do & googled how far Missouri City was from Houston.

The fifty homes were located in Sienna Plantation, that, according to the Internet, is a census-designated place and master-planned community located in Missouri City, mostly in its extraterritorial jurisdiction, within Fort Bend County, Texas.

I also learned that the commute from Sienna Plantation into central Houston is indeed approximately a bit less than 30 miles taking the Fort Bend Tollway.

So, I acknowledge my initial assessment of MSNBC’s geographical fact was extremely flawed & influenced by the fact that no resident of the greater Houston area believes anyone outside the state knows how much geographical space we occupy.

However, I do not believe, even by Texan standards of distance, that Bolivar Peninsula, 300 miles from Padre Island, is a “bit” north of Corpus Christi.

As this day of respite from the storm known as Harvey progressed, I managed to make trips for more applesauce (required for Jean to take her meds), canned soup I did not need, fruit, bread (for the vast amount of peanut butter in the pantry), toilet paper I most certainly did not need, Ghiradelli mini dark chocolate bars (a bigger necessity for Jean than applesauce) & after a discussion with my dear friend Muriel, a secret stash of Fritos & bean dip.

It is now 10 pm.  A hour earlier, wind & rain were the dance of the moment.  The house that Jean & Jack built leaked where it always leaks during a heavy rain storm.  Our street looked like a determined, quiet river headed for the storm drains.

Now the street is clear, the flash flood & tornado warnings are in effect.  Jean is still watching the Texans game.  I do not like the post from our little city to take cover if we hear a siren.

I cannot blow out a tornado.
Posted by Jaki Jean at 8:26 PM