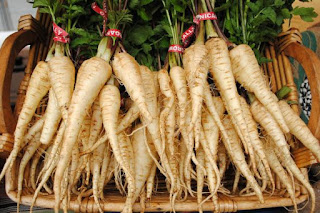 The first time I ate parsnips was over thirty years ago in a recipe I had to ask my supervisor & friend, Louise Talley Richman, to translate from French.

We were working for an offshore company owned by a parent company in France.  Created to move money out of France in reaction to the perceived threat of radical socialism.

The parent company was involved in the North Sea, South America, eventually Russia.  The Gulf of Mexico & Texas looked promising for a profit & safe haven from a socialist takeover.

I got the job in ETPM’s accounting department through a woman named Faith a former co-worker of my then spouse.  Faith left the retail company where all three of us worked for ETPM, kept in touch with us, & provided a reference for my interview.

(Faith & I once shared a dream on the same night.  But that is another story.)

The job led me to finally, after five years, leaving a man who would never be the husband I once thought I needed & wanted.  It led to a lifetime of connections, to two trips to Paris, several amazing relationships & the birth of my Alpha Son Nicholas Jordan Ettinger-Ravel.

And an appreciation of parsnips.

Each week, crew & management arrived to replace exiting ETPM crew & management & there was always an exchange of mail bags.  Included in the bags from Paris were magazines.  One of which always had recipe cards with beautiful photos.

When I left my husband, my friend & supervisor Louise gave me a lot advice – but the best thing she gave me was given to her by her mother when Louise & her first husband divorced.

At least one day a week, take out the china & crystal & cloth napkins.  Prepare a meal, a fine meal, for yourself.  Light candlesticks & put on music you love.  Indulge.

I followed a great deal of Louise’s advice – but a meal for myself once a week became a ritual.

One week, the recipe cards with beautiful photos included a recipe for a soup.  That required parsnips.

I had no idea what parsnips were.  In the days without Google or the Internet, I looked them up in the dictionary.

In those days without Google or the Internet, vegetables & fruits were strictly seasonal – not readily available year-round.  For parsnips, I had to go to a luxury grocery store located inside the Loop - Jamail’s.

In the days before Whole Foods or Central Market or Trader Joe’s, Jamail’s was THE Houston premier grocery store.

Founded in 1946 by Nageeb “Jim” Jamil, a native of Lebanon, Jamail’s served those who could afford its quality or dared to enter it until 1988. 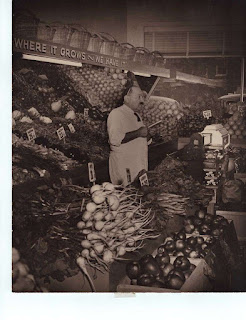 Previous to my pursuit of parsnips & my weekly ritual to cook for myself, I had only been to Jamil’s to buy Science Diet cat food for my felines (no Petsmarts in those days) & Shiner beer (the only place I knew of to buy it except by the mug at the Hobbit Hole).

Wandering around Jamail’s gave me valuable information.  First, I was woefully ignorant of so many culinary wonders.  And second, it was really important to get to know the men behind the butcher counter.

I learned to take a number & wait patiently in line behind women & men who knew the behind the butcher counter guys.  And listen to their question & answer exchanges.

At Jamail’s, no one rushed anyone.  Eventually, I learned to recognize the butchers behind the counter & greet them by name.  I would come in with my translated recipes reduced to a recipe for two.

During those years, when no one rushed a customer, I stood in line to ask for enough cuts of different meats for two.  I bought my first prosciutto & pancetta outside Italy at Jamail’s.  Eventually, I bought lamb & veal.

I once was invited to eat Beef Wellington with a friend & his fellow Rice graduate student house mates.  Prepared with truffles from Jamail’s.

And then I bought parsnips.

The translated soup recipe called for more vegetables than parsnips.  Carrots, potatoes, leeks, turnips, tomatoes, green beans, ingredients I have forgotten except for chicken stock & cream  & white wine.  And the participation of a blender, which left a thick, rich soup best served with a simple salad & a baguette of bread.

Over subsequent decades, I lost that recipe card, but continued to use the basics of the recipe.  Always with parsnips.

I have served grilled & roasted root vegetable medleys at family meals.  No one ate around the parsnips.  Of course, I did not tell my guests that they were eating parsnips.

Just as I did not tell my sons that the lovely Lasagne Pasticciate they ate included a Ragú Bolognese involving liver.  Just as I waited tell my sons, nieces & nephews that the secret ingredient in the chocolate garden cake they devoured on Easter Sundays was grated zucchini.

(I broke a year of protest against consuming meat after my father killed a Bambi.  All for Jean’s stew . . . only to learn after devouring two bowls of stew that I ate Bambi).

If somebody cooks you dinner & the dinner has parsnips make sure you have a barf bag next to you.

Apparently, from the lively discussion that ensued in response to Juan’s insistence that a root vegetable I really like be renamed barfsnips, my compassionate friend is not alone in his rejection of parsnips as a desired staple.

No matter.  I stand by the humble & maligned wonder called a parsnip.  Just as I stand by that lasagna with meat & cream sauces, just as I still think grating zucchini in chocolate cake & cupcakes & banana bread is cool & tasty.

Of course, I stand by liver & onions, but that is another story.

Today, I came to understand how Juan Rangel feels about parsnips.

Because, during my adventure today, traveling to my eye doctor’s office to pick up a refill on my contacts, I found two bizarre & inexplicable items.

Not at my favorite Indian grocery store, which is the same plaza along the Southwest Freeway that hosts my eye doctor’s practice.  I left later than I usually make this journey & the plaza, full of Indian restaurants & sari & jewelry shops, was a happening place on steroids.

Parking was limited – access to the Indian grocery store daunting.  I needed to finish my other Saturday morning errands & could not take time to explore the wonders of my favorite place to buy cinnamon sticks, cloves, turmeric & chutneys.

I found the two bizarre & inexplicable culinary items that ignited my understanding of barfships at a Dollar Tree & my local Randall’s grocery store.

I went to the nearest Dollar Tree to my home for a very specific item (an item not available at my current favorite Dollar Tree, which is on the way to the library).  I found the needed item & other treasures.  Including some really cool Christmas ribbon.

It was at the checkout counter that I spotted something I never envisioned or anticipated. 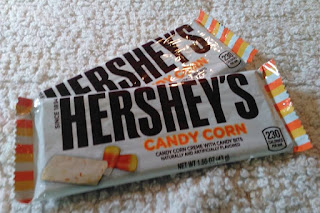 All I could think was, seriously?

When was candy corn not enough on its own?  When & why did Hershey’s create this abomination of a Hershey’s bar that does not involve chocolate?

I don’t even like Hershey’s bars that involve cookies & cream & white chocolate.  Except to use as windows or sidewalks on my annual gingerbread house.

Then, at my neighborhood grocery store, there was this:  Organic Pumpkin Pasta. 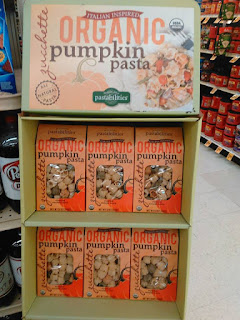 I love pumpkin.  I love pasta.

What kind of sauce does one serve on organic pumpkin pasta?

Somehow the idea of pumpkin pasta with parsnip sauce & basil does not appeal even to Jaki Jean.

Alliteration, yes.  But even the noble & much maligned parsnip is not equal to the task of adorning pumpkin pasta.

You, Juan, tried & tasted the noble parsnips.  I cannot fathom tasting a candy corn Hershey’s bar or organic pumpkin pasta.  You are a good & brave man.

Sometimes parsnips, or candy corn Hershey bars, or organic pumpkin pasta, are not culinary marvels.  It is all about perspective.

PS:  I still think my friend Douglas the Purple Mouse, a gift from Sue Ann McLauchlan Faulkner, is responsible for this particular thread of friends. But that is a story I have shared before.
Posted by Jaki Jean at 10:30 AM