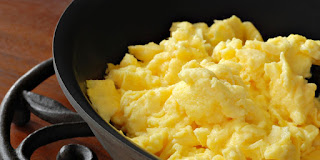 This morning, my second morning without access to the Internet (no hurricane, no disruption in electricity, just a failure by our provider to lay cable for Super Mega Amazing speed without disrupting existing service), a wave of memories assaulted me.

As I scrambled eggs (well, one actual egg with ¼ egg substitute serving as the second), I thought first of Martha Stewart & how I continually fail to follow her instructions on how to perfectly beat eggs.

I break all the rules.  The mixture I use for Jean does not go into a bowl, is not whisked carefully.  Jean’s cage free organic egg & an egg substitute (& most often salsa or herbs) are vigorously mixed with a fork, in a ¾ cup Pampered Chef glass measuring cup

The last of three Pampered Chef measuring cups I purloined when my sister brought Thanksgiving dinner to us during a stay with Jean in the hospital.

I poured the egg mixture into the pan of melted butter (having decided that at 82, a woman without high blood pressure & without high cholesterol was not threatened by butter with her eggs, or butter with anything), I let it sit for a while in the heat.

Then I picked up a wooden spoon & as I began the break it up & bring it back into the shape of scrambled eggs, I remembered a morning in El Paso, waking up after a sleep over in my the home of my friend, Glynnis.

Glynnis was a few years younger than I.  We went to the same school, the same church.  Her mother Nolene was friends with my mother Jean.   Our mothers had babies within a year of one another.

Nolene’s  maternity wardrobe was how I learned that Jean was pregnant at an age I found at the time, unfathomable & embarrassing.

I came home one afternoon & found my mother trying on clothes.  Clothes I recognized.

When I asked her why she was trying on maternity clothes, she replied with the obvious.

Infusing into my brain a vivid realization that my suspicions about the meaning behind the closed door of my parents’ room after time for breakfast on Saturdays.

I wondered how to explain to my friends that my all too young mother was having a baby at such an advanced age.

The morning of my sleepover at Glynnis’ house, my friend made breakfast for us.  And I was fascinated.

In my then fifteen years on this planet, no peer had ever cooked for me.

At my house, Jean made breakfast.  Every day.  For every one in her care.  Even on camping trips & vacations.  When I spent sleep overs at other friend’s houses, the mom in residence made breakfast.

Except for when I spent the night at my friend Colleen’s home.  We woke up, wandered into the kitchen & found her father, the doctor who pierced my ears at thirteen, opening cans of Pillsbury biscuits to bake for his children & a sleep over guest.

It was apparently a tradition – Dr. Dad making biscuits on Saturday mornings.  Nothing in my vast life experience had prepared me for canned biscuits, much less a husband & father preparing food.  Serving food prepared by another, yes.
But not preparing it.

Or for the sight of a father carefully placing candy sprinkles on the top of some of the uncooked biscuit dough.  My astonishment did not escape my friend Colleen’s notice.

He does that for me, because I have a bit of a sweet tooth.

That morning at my friend Glynnis’ house, as I marveled at the idea of a peer making breakfast, Glynnis asked me if scrambled eggs & toast sounded good.

After I assured her it was a very good idea, she brought out a carton of eggs & butter from the fridge.  I waited for her to find a bowl to break the eggs into, an implement for whisking or mixing them.

Instead, she heated up a few tabs of butter, & when the butter was melted, cracked the eggs on the edge of the frying pan directly into the bubbling butter.

I can’t remember if I voiced the question in my head:  Is she making fried eggs instead?

But I did ask her if she had ever made scrambled eggs before.  Her reply amazed me.

Of course.  I make them the way my Mom makes them.

Fifteen year old Jaki Jean was doubtful, certain that someone was terribly confused or that I was having one of those crazy, detailed, vivid dreams of my youth & would wake up to find my friend’s mother Nolene making a breakfast in ways I recognized.

I watched, confused, skeptical & fascinated, as Glynnis took a fork & mixed the cooking egg yolks & whites together.  And as she picked up a spoon, carefully folding the mixture into a shape I recognized as scrambled eggs.

That morning, I had a breakfast of strangely prepared, but scrambled eggs, toasted white bread slathered with strawberry jam & glasses of juice.

We laughed, shared stories, & wondered if there would be more sleep overs before she & her family moved from El Paso to Houston.

There were none &  a few months later she was gone & a  year later,  my family made the same move.

Our families settled in different parts of the greater Houston area.  And eventually lost contact.  Glynnis dated & later married the cousin of a man I once firmly believed was meant for me, but that is another story.

Really, a quite lovely & another story.

This one is about scrambled eggs, different ways of making them & why that difference matters to me.

In the case of the morning after a teen aged sleep over, the initial discovery that there were different ways of approaching & creating scrambled eggs that led to results that were similar to my previous experiences remains in my memory.

But scrambling eggs & scrambling ideas & concepts is not as easy as a breakfast prepared by a teen aged peer.

During what my sixty three year old self understands is the most challenging time of my life, constantly trying to make sense of the world & norms crumbling around me, I think about scrambled eggs.

Different conclusions, different positions.  At times, opposite of one Other.
And often irreconcilable.

Exchanging ideas, respecting the Other’s difference & different opinion & different methods, should be as easy as scrambling eggs.  However you scramble them.

But it isn’t that easy or that simple.

Assembling the same information, processing it, drawing a conclusion & formulating a position is not like scrambling eggs.

While I found it so easy to accept & embrace the result of a different method of scrambling eggs, I cannot accept or embrace the results of an electorate that used an unfamiliar & unfathomable method of deciding to vote for an Apricot reality star to lead the nation & the free world.

If this is the Lord’s ultimate challenge for me, to reconcile the irreconcilable, I admit to the Lord of Song that I have so far failed Her.

Even with tossed salad. 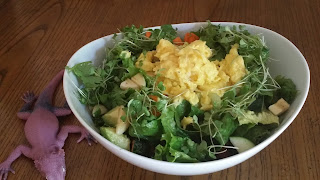