Jaki Jean on the Blue Wave in Meadows Place 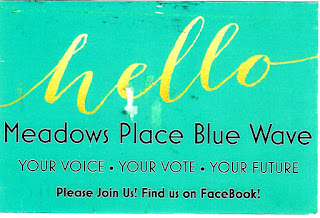 For the past thirty odd years I have voted in Meadows Place, knowing that Texas District 22 was bright red.  I had to smile at the idea of a blue wave in this particular not quite one square mile city.

I first cast my vote in 1972, the first year 18-year-old citizens were given the right to determine which elected officials would call upon 18-year-old males to fight a war they did not create.

It was a powerful experience.  I went to the polling place with my Republican father Jack & my mother Jean.  (I did not know until I was a grown woman that Jean never discussed her votes with Jack.  She currently refuses to vote for any Republican.)

Our neighborhood Meadows Elementary School was a polling site for District 22.  When we entered the school, my parents were directed to the cafeteria, where the Republican primaries were going on.

I joined those voting in the Democratic primary in a kindergarten classroom.  (Years later, my eldest son was assigned to that same classroom.)  The five people in the room welcomed & hugged me.

Tempting as it is, I will not even go into the symbolism attached to the two sites.

My first vote was written on a paper ballot.

While 1972 was my first year voting, I had spent years of my childhood at my father Jack’s feet, watching both the Republican & Democratic conventions.  My job was always to keep track, state by state of the votes.

Sitting on the floor next to Jack, I listened to the speakers with the same solemn & serious attention that I gave to our minister every Sunday morning sermon, every Sunday night sermon, & every Wednesday prayer meeting.

And in the background of that rapt attention, there was the civil rights movement, the Vietnam War & the beginnings of the first wave of the Women’s movement.

Although my father Jack never understood, all those conventions & conversations groomed me to reject the party he believed to stand for the direction our country should take.

Receiving the Blue Wave in Meadows Place card surprised me.

The population in Meadows Place is somewhere around 5,000 residents.  Among those residents are a substantial number of children under 18.  Meadows Place has one of the highest turn outs in Fort Bend County – a very red county that also just happens to be one of, if not the most diverse, counties in the country.

I try & wrap my mind about these numbers. All those voices never heard, all those votes never cast.  What changes those voices & votes might have initiated.

Here in Meadows Place, our Blue Wave group is a pocket of resistance.  The odds are stacked against us  in this very red Texas District #22.  A district once dominated by Ron (not Rand) Paul & Tom Delay.

Meadows Place Blue Wave targets voter participation & voter registration.  And those one thousand plus registered voters who did not vote in 2016.

Every day, with each outreach, our numbers grow.   And those numbers will continue to grow & prepare for 2020.

Our group is described as:

Meadows Place TX Residents who are working to turn Texas Blue in 2018, 2020 and beyond! Our mission is to increase civic engagement, build community awareness, participate in community outreach, and meet our Blue Wave neighbors! Please join us!

We are just a small pocket of resistance.  But, if within every less than one square mile area, pockets of resistance develop, change will emerge.

Recognizing those pockets changed my reading, my perception & certainly my interpretation of texts within the literary canon, & texts that emerged outside the canon.

And taught me to seek out pockets of resistance in life, & in politics.

Meadows Place Blue Wave is an emerging force outside the canon of politics in our city, county & state.
I choose to read & interpret Meadows Blue Wave as a pocket with purpose & promise.

Waves invade the shore, recede & eventually move back to sea only to return . . .