Jaki Jean on my First Amendment Infringement Against (an)Other 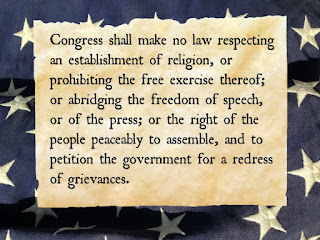 In the last month or so, I have been thinking a great deal about the First Amendment to the Constitution of the United States.

Not because of the NFL protests or whether to take a knee. Not about how the twisting of the free exercise of religion to exclude Others.   Not about the current administration’s attack on the free press as the enemy of the people.

Clearly the First Amendment did not consider the free press an enemy, but an essential check & balance of the how a democracy must operate in order to survive.

No, I have been thinking about the First Amendment because I have been accused of violating Others of their right to free speech.

Many of my family & friends & readers know that I a reluctant admin of a closed Facebook group here in the not quite one square mile city in which I live.

If there is one certain thing I know about myself, it is that I am not suited to be an admin of any Facebook group.  I doubt that there are many people less suited.

While I always attempt to be a kinder & gentler Jaki Jean - I do not suffer a fool gladly, I am intense, dramatic, emotional & too often volatile.  I have been advised to avoid the appearance of intelligence.

I fight to filter & censor myself every day, to take time to write out a response in Word before posting, walk away & return to rethink & rewrite.

Pausing to decide if I should post or not.

Pausing is not natural to me.  But I have learned as I have participated in this still new social media forum to pause.

When I was recruited to be an admin, I told those recruiting me that I was unsuited for the task.  Unequal to the task.

For me, that was the end of the discussion.   But somehow, I was added as an admin.

A succession of previous admins had withdrawn due to some not quite neighborly or civil push back.  No one wanted the job.

I agreed to help because the remaining admin has a decades old connection to our family & was facing some stressful challenges at the time.

The group has clear, basic parameters, membership requirements, & a call for civil discourse.

Must be a resident of MP. To become a member please message me a copy of your utility bill showing MP address. Any member that belittles or insults other members in post will be deleted. NO POLITICAL POSTS ON THIS PAGE. TAKE IT TO YOUR PERSONAL PAGE.

It is a group designed to share & disseminate information to residents.  To report, find & rescue lost animals, ask for a recommendation for a service, post reminders about community events.

It is not a political forum.

In the years I have played this reluctant role, I can count on less than one hand the number of posts I have independently taken down.

Until this midterm election cycle.

In all other cases, I have consulted with my fellow admin, whom I consider to be the lead.
As we approach the midterms, neighbors have declared their positions with yard signs, gathering together with like minds in person, at rallies & establishing Facebook groups.

And, to my dismay, tested the NO POLITICAL POSTS rule in our group.

In the beginning, all of the posts in violation of our neighborhood group rules were taken down before I had to act.  Until a friend of both myself & the lead admin entered the equation.

I contacted the lead, who was dealing with a family medical issue.  She told me to handle it.

The reaction online did not take long.  That it was a shame that the bad behavior of a few members meant that others could not exercise their First Amendment rights to free speech.

In other words, my removal of the post infringed upon the right of free speech.

My first thought was are you fucking kidding me?  (Sorry, Jean.)  ME?

Not to the group, but to a woman I know & called friend.  A woman who passionately believes in the agenda of the Republican party & its interpretation of the role of government.

A woman who understood she was pushing the envelope, a woman who knew I would advocate for removing the post.

A closed Facebook group is not publicly traded.  It is not a news media outlet.  It is not the New York Times, the Wall Street Journal, the Guardian, the Washington Post, the National Review, the Atlantic, the Weekly Standard or Time Magazine.

In the musings of my pause, my cell phone rang & it was my friend.

I took a gulp of wine & answered the phone – not with Hello but with Did you really just fucking invoke the First Amendment against me?

A long conversation followed, the details of which no longer matter.  I listened, I interrupted, I listened, I attempted to participate in civil discourse.  And I ignored every effort to save me from the liberal abyss.

At last the phone call, that seemed to go on for hours, ended.

And thought about the First Amendment & its contents.

During these divisive times, there is a great deal of banter & debate about the First Amendment, the Second Amendment & about the Constitution.

The First Amendment addresses two issues – the fact that these are the first issues addressed is paramount to our understanding of the Constitution.

First, Congress shall make no law establishing religion or the free exercise thereof.

The bottom line is that the founding fathers did not want a republic that required allegiance to a state religion.

Instead, they chose to protect the citizens of new Republic and establish the separation of church & state.

And then the First Amendment turns to the right of free speech, abolishing the abridging the freedom of speech, or of the press; or the right of the people to peacefully assemble and to petition the government for a redress of grievances.

The second part of the First Amendment is about protecting the citizens of the Republic from the government an citizen’s freedom of speech & of censoring the press.  It is about the right of citizens to peacefully assemble in dissent or support & the right to petition the government for a redress or objection of policy.

The second part of the First Amendment of the Constitution, demands civil discourse, peaceful protest & the right to petition the government.

The right guaranteeing free speech & a free press does not allow for me, as a woman, to enter the men's side of a mosque during prayers without removing my shoes, ignoring that I was entering a house of worship & a holy place & insert myself with a reading from the New Testament.

I could not claim that by removing me from the mosque, its members violated my First Amendment rights.

I did not, even with my hubris & drama & intensity, violate anyone’s First Amendment rights.   I enforced a rule, a condition of participation in a closed Facebook group.

In many ways, I still cannot wrap my body & text around the accusation against me.

When I told my sister about this encounter, she said:

This person does not know you.

If have learned anything from this convoluted experience, it is this:  never, never accept the role of admin in a Facebook group against your gut instincts.

And I have learned what I have long suspected - that, unfortunately, friendship does not always transcend politics.

Friendship that envelops open, civil discourse, that does not demand a winner or loser of a debate or discussion, that listens & respects the views of the Other – that is a friendship which transcends politics. 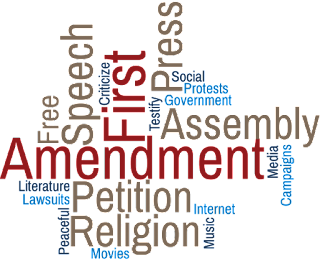