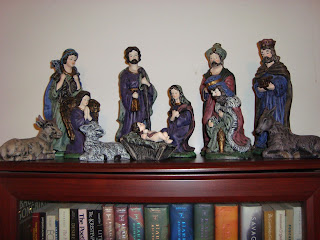 Over the years in the houses we lived in with our parents Jack & Jean, Nativity scenes have come & gone in favor of a new scene.  But for all the years my sons & nieces & nephew grew up, the last Nativity Jean bought was featured.

But not for the last few years.  I vaguely remembered packing it away.  For the past few years, I have not gone in search of the box containing Jean’s Nativity scene.

Memory is an elusive thing – it is filtered & rewritten over the years.  In my memory of the Nativity scene, the Baby Jesus was missing.

When my sons were growing up & my nieces & nephew visited their Grandmother’s house, the Manger scene was always placed where they could see it.

My youngest niece, Sarah Jane, was fascinated by the Baby Jesus.  Sarah would take the Baby Jesus from the Manger scene & carry it around the house with her – sometimes she would take it to bed with her.

As my memory rewrote the story of Sarah Jane & the Baby Jesus, Jesus was absent from the Manger.

But this year, as I was consumed with wondering if it will be our last Christmas with Jean, I went in search for the box containing her Nativity.

Influenced by watching too many Hallmark & Christmas movies to avoid hearing the voices of Donald Trump or Kellyanne Conway, movies that did not tell the true meaning  of what we celebrate at Christmas, of the birth of the Savior.

I went through boxes in the garage – but no Nativity.  In desperation, I checked out an unmarked box & began taking treasures out of paper.  At first, it was a miniature Christmas tea set.

Then I unwrapped a lamb.

When I took the box into the house to unwrap the Manger scene, I saw that it was clearly labeled.   On the inside of the shelf it occupied. 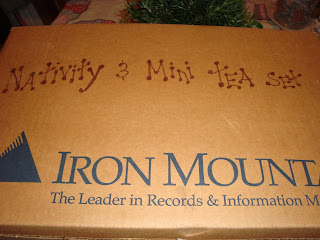 Clearly marked in a script I used to mark my sons’ school things.  Until both of them instructed me to cease using it.  It is embarrassing, Mom.

And after finding the lamb & donkey & the cow & the shepherd & the three Wise Men & Mary & Joseph & the Angel, I found Baby Jesus.

And I was happy that my memory failed me.

And reminded me of what exactly we celebrate during Christmas. 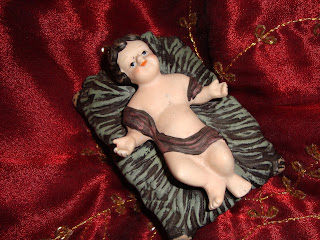