To a few of us here today this is a solemn and most momentous occasion. And, yet, in the history of our nation it is a commonplace occurrence. The orderly transfer of authority as called for in the Constitution routinely takes place as it has for almost two centuries and few of us stop to think how unique we really are. In the eyes of many in the world, this every-four-year ceremony we accept as normal is nothing less than a miracle....  Ronald Reagan, 1981


While January 20, 2017 not the day for which I had hoped, not the inauguration of America’s first woman President, it was, as is every Inauguration, an important moment in history.

How that history plays out over the next four or eight years, what impact & changes it will bring to our country, will be for subsequent generations to analyze & interpret.

For me watching the transition of power was, as always, overwhelming.

I wept.  Not just for my disappointment & a dream shattered, not just because I am wary of a man whose words & actions & promises cause me to fear the future of the country & the world.

I wept at the wonder of a peaceful transition of power that has occurred since George Washington turned over the Presidency to John Adams.

And a sincere hope that we never forget to appreciate that wonder.

But I was not so overwhelmed that I did not listen carefully to the 45th President’s Inaugural address.

It was, for me, a strange speech.  But its content not unexpected.

Although I wanted to believe that #45 would use this day to extend an olive branch to those of us who did not support him & call for the nation to come together & embrace difference, DJT spoke to his base, reassuring him of his commitment to their dreams, their needs, their demands.

Demands that he described as those of a “righteous people & righteous public.”

Americans want great schools for their children, safe neighborhoods for their families and good jobs for themselves.

But he will listen to a “righteous people & righteous public.”

I so wish someone who ask him his definition of righteous.

Invoking the Bible offended me as a believer.  I have major issues with people who profess to love God & to listen to Her using the Bible as a political tool or an excuse for behavior that is the antithesis of Judeo-Christian teaching.  While I have no access to DJT’s heart or soul, it was an invocation designed for his base, not for all Americans.

At the bedrock of our politics will be a total allegiance to the United States of America, and through our loyalty to our country, we will rediscover our loyalty to each other. When you open your heart to patriotism, there is no room for prejudice. The Bible tells us how good and pleasant it is when God's people live together in unity.

The Biblical reference Trump’s writers used is  Psalm 133:1, one of the Song of Ascents.
Attributed to David, Psalm 133 consists of three verses:

1 How good and pleasant it is when God’s people live together in unity!
2  It is like precious oil poured on the head, running down on the beard, running down on Aaron’s beard, down on the collar of his robe.
3  It is as if the dew of Hermon were falling on Mount Zion. For there the LORD bestows his blessing, even life forevermore.

Scholars differ on the history of the title of Song of Ascents given to fifteen psalms – but one thing prevails in the various explanations.  The psalms of Ascents are believed to have been sung as pilgrims made their way to religious festivals.

I am certain that the Bible was not talking about politics or the government of the United States of America or the 2017 Inauguration of Donald J. Trump.

While I admire the veiled subtlety of the use of a Song of Ascents – invoking an upward, rising movement – in this particular moment, it does not resonate with me.

It is so easy to pluck a verse out of a book revered around the world as the Word of God.  I see no upward movement.  I see no one anointing of oil, no dew falling on Mount Zion.

Especially not in an Inaugural Address that channeled “America First” as a mantra.

“America First” is not an original slogan.  The AFC, America First Committee, was established prior to World War II.  Its 800,000 members included familiar names:  future President Ford; Sargent Shriver, who went on to lead the Peace Corps; & Potter Stewart, the future U.S. Supreme Court justice. It was funded by the families who owned Sears-Roebuck & the Chicago Tribune, & counted among its ranks prominent anti-Semites of the day, including Henry Ford & Charles Lindbergh.

Lindbergh, & many other anti-Semites, suggested that Jews were advocating the U.S. to enter a war that was not in the national interest.

It was a war in the world’s interest.  And most certainly in our nation’s interest.

On January 20, 2017, I did not hear a unifying or hopeful beginning to the 45th Presidency.  I felt no reassurance, no hope for positive change.  No call for inclusion of ALL Americans regardless of race, religion, ethnicity, gender or status.  Instead, I was overcome by dismay, sadness & uncertainty.

As I told my friend Marianna Steele, writing about my reaction to the day is a way to expunge the day from my soul, if not my memory.

Of course, Dan Rather summed it up best – as he always does:

We now have a new and untested captain. His power is immense, but it is not bestowed from a divinity on high. It is derived, as the saying goes, from the consent of the governed. That means President Trump now works for us - all of us. And if he forgets that, it will be our duty to remind him.

Today, millions around the world are reminding him.  All of us. 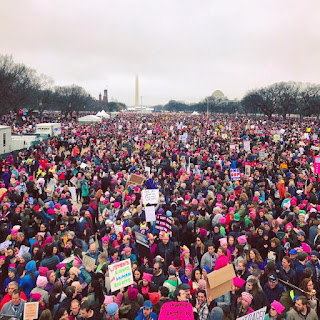