Jaki Jean on Lingering Encounters . . .while driving a grocery cart 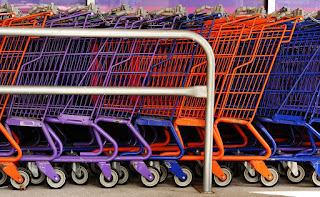 Almost every morning, I take a short journey somewhere – to the library, to a store for groceries, to a garden center.  Sometimes to pick up breakfast.

I take these trips entirely for myself.  Because each trip brings an encounter with something or someone outside & Other than my(Self).

And I have a face, or an aura or a something that invites people to respond to me & share a conversation.  Even when I don’t initiate the encounter.

This ability, no doubt driven my an internal need to connect, is not new.  It has been true throughout all the six decades of my life.

Maybe everyone has these kinds of encounters & I just remember them, save them to the storage discs in my memory & allow them to linger.

This morning I went for more Naproxen Sodium because I have self-diagnosed (with my non-existent medical degree) that I am suffering from arthritis in my left hand.

All my life, in my constant attempt to learn to be a southpaw, I have used my left hand as often as possible.

These days, that is proving to be a challenge.

When I queued up in an open check-out lane (no longer worked by my favorite cashier Ashley, who I hope has moved onto bigger & finer opportunities – but by Cindy.  Who wears glasses, has a beautiful smile & does not know the difference between Hatch & Anaheim chilies) - & found myself behind a young woman & her elderly mother.

As they conversed in Spanish, I understood a bit – the young woman wanted to take her mother to a place in the store to sit down & wait.  At first they left the card & I watched as the daughter led the smiling little lady with her hair tied in a ponytail toward an area off the in-store deli.

Mama returned alone, smiling at me & began to move her daughter’s cart, indicating that she wanted me to go in front of them.

I cursed the fact that I have neglected my Spanish studies & tried to reassure her that I was in no hurry, that it was unnecessary, her daughter was coming – there were others in front of us.

When her daughter caught up with Mama, Mama has begun to take control of my basket & move it ahead in line.  The young woman apologized, explained that her mother had Alzheimer’s & was confused.

I told her to put their cart in front of mine, that I was in no hurry & I had a Mama at home.  Who was 82 & suffered from Parkinson’s & the dementia to which an 82 year old is entitled.  (After all, my mother Jean’s stored memories have taken up room for over eight decades.)

I asked how old her Mama was & learned the smiling little lady with a ponytail was 77.

Fourteen years older than me.

As Cindy the Cashier who speaks fluent Spanish, but inexplictcably to me, does not know how to differentiate between chilies, rang up their transactions, I gathered that the young woman did not have a Randall’s card so I whispered to Cindy use mine, just in case in gives them a better price.

Cindy took my number & smiled, telling me that it did, indeed, lower their cost.

An older man came to the end of the check out counter & took their basket of items purchased.  The young woman led Mama toward an exit.

Mama paused, flashed a smile & sent me another kiss before allowing her daughter to guide her to their car & return home.

As I walked to my car, I again cursed myself for neglecting my Spanish studies & vowed to carve out time each day to sign onto Destinos: An Introduction to Spanish & watch at least two telenovelas a day. 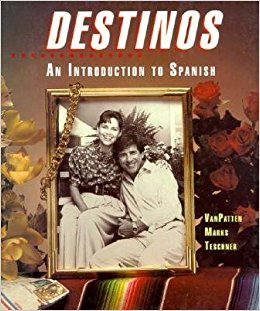 The entire drive home, I wept.  For a woman who will not remember me, but who will linger in the cobwebs of my memory.