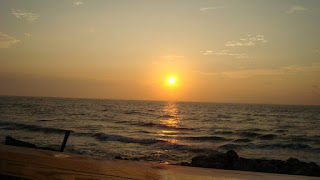 Once again, we woke up, not to a peaceful sunrise over waters in the Gulf, but  to sunshine, dry pavement & mobility.

If not for following Facebook, email & news reports, it could have been any other day in the house that Jack & Jean built.

Except for two things, both related to the dissemination of information spreading like a persistent wildfire on social media.

As my newsfeed filled with rants against Joel Osteen, pastor of the mega Lakewood Church & brutal comments about Melania Trump’s stilettos, I found myself in the uncomfortable, thankless & ironic position of defending two people whose existence simply does not determine the direction of either my spiritual journey or daily fashion choices.

And found myself attacked, in the ways one only experiences when interacting with people commenting from behind the Wizard Curtain of the Great Oz of Facebook.

So, I decided that this is my last comment on Pastor Osteen & on a woman unfortunate enough to make the dubious decision to marry the Apricot.

I learned a social media lesson during my tenure as Defender of the Virally Maligned.

It does not matter to people who choose to rant in the face of all reason & reality that I am not, never have been, never will be, a fan or supporter of either Joel Osteen or the elusive Melania Trump.

I learned that it does not matter if I am a liberal or conservative or a progressive Southern Baptist or radical right-wing fundamentalist or Democrat or Republic or Other or a reasonable human being or an absolute fool.

The rant matters.  Once it begins, it does not cease without fierce interference.

I know something about that – note that I am still ranting about the rants about Joel & Melania.  It is not in my nature to willingly let go of a rant or outrage.  Real, perceived or imagined.

Each day, I struggle with this particular character flaw, drawing on every ounce of self-control & self-discipline I desperately want to possess.

My brother-in-law David Douglas posted an article from Christianity Today about the streaming rage & rant over the Osteen / Lakewood response to events that began over this past weekend.   It is a fine read & reading it does not require absolute solidarity with the author.

Some Christians Hate Joel Osteen More Than They Love the Truth. And That's Wrong.

As I read the article several times, I remembered a very recent discussion about the Lakewood response with my dear friend Muriel.  Muriel said she did not agree with his preaching, that she did not feel his messages were scripturally based.  But –

But if it moves one person to move closer to God . . .

Lakewood Church, like many churches in affected areas in & outside of Houston, did not open for services this past weekend.  Lakewood’s press release about the church closing, possibly not well vetted for the scrutiny of social media, began the raging rants against Osteen, Lakewood & even its congregation.

Lakewood Church, the former home venue of the Houston Rockets, is located inside th Loop.

For those of you unfamiliar with the layout of Houston, inside the loop is a distinctive, older area that includes Downtown & the inner-city neighborhoods of Houston.

All prone to flooding during ordinary rainfalls.

Ask people holding season tickets to the Rockets in the days prior to Osteen’s arrival in the neighborhood.  Ask about those cancelled games due to flooding & hazardous conditions.

Even if the Church building itself did not flood, the streets & routes to it would.  Stocking a facility the size of Lakewood required amassing a core of staff members, volunteers & essentials for housing & feeding those seeking shelter.  Arrival of needed personnel & delivery of essentials required access to routes unaffected by the flood waters.

Having worked in a building that overlooks what is now Lakewood, I have hunkered down during at least one Hurricane with co-workers in our sixteenth-floor offices, unable to drive home to our families.

Grateful for the office kitchen, the stocked deli downstairs leading to the underground parking, & the fact our company was owned by a French firm.

The French always stock liquor & wine in their offices.

On Friday night, as people prepared for the worst possible outcome of Harvey’s arrival, it was not possible to know the exact depth of the storm’s wrath, beyond This is not going to go well.

Trust me, this ranting defense of Osteen (the irony of which does not escape me) is closing down.

Once the facility was deemed secure, staff present, the church put out a call for volunteers & donations to house & care for those in the area needing a safe shelter.

Like everything else the region faces & will continue to face, the timing of responses can be evaluated, judged, assessed & plans rewritten later.

Our shared regional reality is still very much focused on rescue & shelter.

And that, for those of you patient enough to read this far, is my absolute response of this particular social media rage.

Now, about those stilettos. 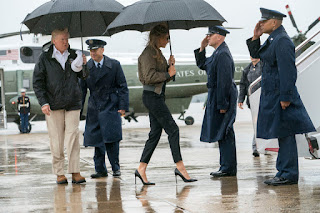 I don’t give a fuck about Melania’s stilettos.

The picture that went viral was taken as she boarded transportation to Texas.  She changed clothes on Air Force One & descended in Texas in an outfit strangely color coordinated with the Apricot’s gear.

Wearing shoes that looked very much like tennis shoes.

With everything happening in that moment of arrival, I & most of us worried about the fate of our loved ones & neighbors & fellow Texans facing disaster, I promise the nation that we were worried about much greater issues than FLOTUS’s fashion choices.

Jaki Jean does not, cannot, will never navigate in stilettos.  The shoes I wore to my eldest son’s wedding were two inches high.  (I measured them.)  They lasted exactly as long as it took me to walk down the aisle, pose for pics & get them off my feet into blinged out flip flops.

The bride’s lovely mother simply removed hers for the reception & danced barefoot.

But the remnants of my younger self admire anyone, including my beloved daughter-in-law, who can.

I do not pretend to know how Melania Trump envisions her role as First Lady of the United States.

I have come to admire each of the First Ladies of my six decades.

But I have no expectations of our current First Lady.  I find that sad & regrettable for the nation.

Melania may surprise me.

After all, she can walk with grace & ease in those stilettos.  Under an umbrella.

Meanwhile, I am working on what is, in my small corner of this complicated post Harvey world, my thoughts . . .
Posted by Jaki Jean at 9:27 PM