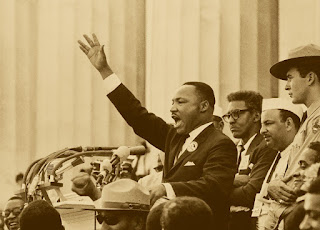 Over this past weekend, as cable news relentlessly discussed the president’s lack of participation in or recognition of a federal holiday dedicated to Martin Luther King, Jr., Jean asked why no one was broadcasting King’s “I Have a Dream” speech.
.
She also began to advocate to hear it again.

While I assured her that if no one broadcast it, I would find it on the Internet & plug my computer into her television, Jean was dubious.

Monday morning, she firmly demanded to hear King’s speech in a voice I recognized from my childhood:

I want to hear the speech.

It was the same voice that would say Some one needs to feed the dogs.

I remembered the time Jean said Some one needs to feed the dogs one too many times without the expected response to her call for action.

I protested that it was not my turn to feed the dogs.

Jean threw a shoe across the room at me & said:

I don't care whose turn it is, go feed the damned dogs.

Jean's voice yesterday morning, & the possibility of a flying object in my direction, inspired an instant response to  her call for action.

I began to scour the web.

Jean’s admiration of Martin Luther King, Jr. began in the 1960’s, during the Civil Rights movement.

I can remember watching a broadcast of the 1963 March on Washington with Jean, hearing King's  I Have a Dream speech for the first time.

When it was over, she said:

That day, hearing King & Jean, my nine-year-old self began to awaken to the realization that difference in skin color resulted in something unfair & inequitable.

(Although I am quite sure I did not use the word inequitable.)

Integration without assimilation, union without loss of self,
difference without dominance.

I found a documentary on MLK, but when Jean watched it, it did not contain his I have a Dream speech.

But, through the wonders of You Tube, I had a backup plan -  a video of The Speech.

We watched it together.

As we watched, Jean's focus never wavered, her eyes never left the screen.

Martin Luther King’s work was not about building walls designed to exclude & divide.
King's legacy is the antithesis of the current administration’s need to inflame identity politics & promote racial, ethnic & socio-economic division across the country.

For the Vice-President to usurp King’s words to compare the efforts of an inept President to promote an ineffective Wall along the southern border was not merely audacious & unconscionable.

Jean was not amused.

My father Jack instilled a fervent interest in politics in my inquiring mind.  My mother Jean opened a different exploration.

An intense need to understand inequity & injustice.  A need to reconcile division & subjection with what I knew in my soul could be a very different, a finer, world.

I have shared almost 65 years of Jean’s 83 years in this realm.  I have marveled that this loving & intelligent & witty woman guided by a deeply rooted faith & convictions is my mother.

As we watched & listened to King today, I thought about this journey I am sharing with Jean.  A journey I am honored & privileged to share with the remarkable woman who is my mother.

When the You Tube video was over, I said I wish we had a thousand more of him.  Jean responded So do I.

One day, a day that will be all too soon for me, Jean will join her parents, her siblings & their spouses, her husband & the son they brought into the world, in a new realm.

And she will join the man she would follow anywhere.

I have a dream that one day, down in Alabama, with its vicious racists, with its governor having his lips dripping with the words of interposition and nullification; one day right there in Alabama, little black boys and black girls will be able to join hands with little white boys and white girls as sisters and brothers.
I have a dream today.