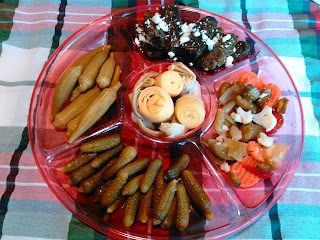 When Jean & I began to cook together after my father Jack died, the relish tray began to evolve.  The stuffed celery was abandoned, replaced by black olives, pickled okra & pepperoncini.

On at least one occasion, the relish tray morphed into something unrecognizable:  an appetizer of green bell papers positioned in a hallowed out red pepper, slices of yellow, orange, red & green peppers, green onions, baby carrots – all surrounding a hallowed out purple cabbage filled with blue cheese dressing augmented by crumbled blue cheese.

I wish I could take credit for that particular creation – but I purloined it from my friend Connie Dressner Tuthill, who served it at her daughter Kim’s First Birthday party.

I have a vague memory of a discussion with my sister or perhaps my mother, assuring Janet or Jean that the traditional Ettinger relish tray was no longer necessary.

But this past Thanksgiving, my feelings about that tradition changed.

I was in charge of dressing, cranberry sauce & brussels sprouts with balsamic vinegar & shallots.  I tried to sell everyone on the fig & jalapeno preserves.

In our conversations before & throughout the meal, memories of past Thanksgiving culinary wonders emerged.  My niece Emily asked her mother about mashed potatoes.

My sister turned to me & asked me to explain why there were no mashed potatoes for Thanksgiving dinner.

I cannot say when or where or why I developed my objections to serving the two dishes at the same meal.

I took a breath before articulating my explanation for the absence of mashed potatoes.

My objection to serving dressing & mashed potatoes is an idiosyncratic, personal culinary choice.

My niece Emily announced that she was in charge of the next holiday meal & that there would be both mashed potatoes & dressing.

I asked if the two dishes could be served at opposite ends of the table.

I doubt I made any Aunt points with that suggestion.

Eventually the conversation turned to the traditional Ettinger relish tray & my intention to revive it.

As I listened to the conversation – I never got the deal about pickled okra – Save all the pickle okra for me – What kind of olives – I thought about how Nick was introduced to cornichons.

Most people who know me are aware that my Alpha Son’s father is French.  And I am quite certain that Nick acquired a taste for cornichons from his father Jacques.

When Nick was not quite two, his father & I embarked on a pate making frenzy.  Not a competition, just different approaches.  I preferred country pates – he preferred more complex recipes.  Jacques introduced cornichons & a baguette to servings of pate.

This year, the requested Cornichons proved to be a challenge.

I live in what I can only describe as an immediate grocery store desert.  I claim this with all due respect to & understanding of the problems families face in true food deserts.  Places where existing stores with limited choices charge exorbitant amounts for boxed, canned & frozen foods with little or no fresh items available.

Our neighborhood Randall’s (part of the Safeway empire) closed last April.  I was used to finding almost everything I desired a few blocks around the corner from the house that Jack & Jean built.

Randall’s always carried Maille Cornichons.  Gherkins made in France since 1747.  More expensive than traditional gherkins, but not outrageous for a holiday dinner.

None of my nearby & limited grocery store choices carry French cornichons of any variety.

So, like any Amazon Prime member, I searched the options for delivery.

Most of Amazon’s sources wanted twice the amount I had every paid for cornichons.

Even free shipping did not justify the price.

None of the major grocery chains in our area admitted online to carrying cornichons.

Walmart offered Maille cornichons for a reasonable price but shipping was more than the pickles.

So, I ended up ordering the minimum for free shipping from Wallymart (all items I needed).  The Cornichons were the last to arrive – apparently, they had to be shipped from Ontario.

I wondered as I was awaiting the arrival of the cornichons why it was so important for me to reclaim & redefine the Ettinger Relish Tray.

It was a connection to holidays past.  To my mother Jean’s menus, to something undefined but all too important.

So, I sent my menu to my sister Janet with her assignment:  Pecan Pie, Chocolate Pecan Pie (my request) & Cherry Pie.  (The cherry morphed into apple – no doubt at the request of my brother-in-law David).

As I looked across & around my Christmas Dinner table – at the cranberry brie bites, sausage stuffed mushrooms, ham, warm potato salad, spicy greens, Hawaiian rolls & a relish tray, I felt a connection with all those other holiday dinners, with my parents & siblings & perhaps, with time itself.

My 2018 Relish Tray was a new creation with threads rooted in the past.  Pickled Okra, Artichoke Hearts, Grape Leaves, California Hot Mix & those elusive Cornichons.

For me, the Relish Tray was part of creating my own culinary text.  Strands from a braid of previous palatable & tempting texts into an edible story of my creation.

A reminder that everything we create is a re-braiding of what came before. 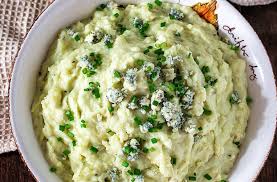